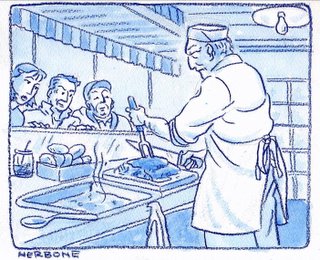 Can I just stop giving travel advice for a minute and simply give you an order? Good. The next time you are in the neighborhood of the Central Mercato in Florence, for God’s sake go to Nerbone and have a brisket sandwich.

The Mercato is a square block two-story warehouse of food. The downstairs is primarily a meat and cheese market with the random herb and vinegar shop thrown in just to keep the arteries unclogged. Although there are hundreds of different meats available in all forms it is fairly easy for even an American to identify the various cuts. This is because a lot of the meat still has its head attached. Upstairs are the fruits and vegetables. Prior to entering, take out your travel-sized can of WD40 and apply liberally to the neck: guaranteed, your head will spin. In the pursuit of honest and accurate reporting, I decided to carefully count all of the stalls and came up with the exact figure of: a lot. While my daughters do not share my unnatural obsession with aging newsprint, we all do love to cook and eat and a few of us do not even mind doing the dishes. The stalls in the Mercato are run by people who are serious about food, too…serious about selling it. The prices are competitive, the stuff is fresh, and great care is given to the presentation. It looks so good that you want to touch and squeeze everything, but please do not or the vendor may touch and squeeze your throat. I saw one tourist poke a grapefruit and within minutes his left hand was for sale downstairs next to a pig’s head.

The vendors’ day probably begins around 4 AM and by the time it rolls around for a mid morning snack, they head for Nerbone. Tucked in a far corner of the Mercato, Nerbone may as well be the culinary annex to the Duomo; it is that close to heaven. There is not much on the menu, but it is simply prepared and, given its proximity to the freshest food on the planet, it is, of course, fresh.

The other morning I wandered by around 10:00 and there were five guys who had already put in a good day’s work chopping off the hands of tourists all eating plates of pasta with tripe and drinking wine which I noticed was laced with water…after all there was still another full work day in front of them closing up shop. I swung by several times over the next half hour to detect the most popular dishes and also because I could not read the hand written menu tacked up on the wall. I needed to find something that someone else was eating so I could point to it with one hand while waving a fistful of Euros in the other.

On one pass I saw three husky men all attacking the same plate of cooked greens with slices of garlic the size of poker chips. On the next go-‘round I caught a crew of German tourists drinking beer and eating pancake stacks of roast pork slices. I knew I was getting close. Then on third circuit I saw my destiny. A guy, whom I recognized as one of the fish vendors, was tucking into a panino and I could tell I had to have one, too, just by looking at him. For a few seconds he went all fuzzy, as though he had turned to vapor. Hovering at mouth level, however, the panino remained in sharp focus as most of his corpuscles concentrated solely on that roll filled with hot brisket. Lucky for me the Maestro is very good at divining the needs of those of us who are Italian-impaired. I didn’t even have to point. Drool overcomes all language barriers.

He plunged a fork the size of an ox yoke into a steaming vat and withdrew a brisket that had been simmering for some time in what looked like a sea of grease, garlic chunks, and liquid temptation. He sliced open a roll and deftly dunked the bottom half momentarily into the vat. I would gladly have offered to dunk my head in as well, but that service was not offered. With his mighty Norman Bates’ signature knife he trimmed off several steaming slices, arranged them on the roll, momentarily assessed the stack, then added a few more until it was just right by his experienced standards. He then tossed on a little black pepper, a little (well, O.K., a lot) of salt, a dollop of salsa verde (it’s green, so my daily quota of the vegetable food-group could be checked off), a dollop of salsa picante (it’s red so my daily quota of the red food-group could be checked off), dunked the exposed bottom of the top half of the roll in the steaming juice, plunked on the lid, and tucked the whole thing neatly into an open ended plastic bag just made to fit. It is a good thing that it was early in the day because around 1:00 there is no place to sit and if I had not been sitting down I would have fallen to the floor and started to speak in tongues, the level of ecstasy was that high.
Posted by Paul Karasik at 7:19 AM