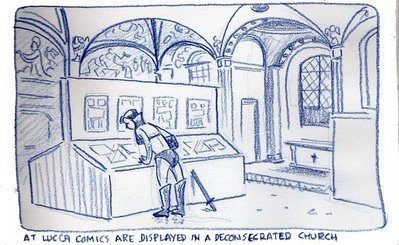 In most ways this years’ comics festival in Lucca was a huge improvement over the one I attended last year. By moving the festival inside the walls, which surround of the city, the business of comics festivals (the meetings, the networking, and the commerce) improved dramatically. Also improved was the fun of comics festivals (the collecting, the trading, and the hemorrhaging of the credit card). But many would agree that the biggest improvement of all was only having to walk one minute out of any of the dozen or so massive tents to find a great cappuccino.

In past years the festival has been held outside the city walls, inconveniently located in a run- down parking lot a good 30-minute walk to the center of cappuccino. Hence people were always running late for luncheon meetings, lectures, and staged reenactments of the battle of Zxon 5 from the 2nd volume of the “Worlds and Galaxies Untred Upon” trilogy: “Barf’s Revenge”. Hey, it’s hard to stage a faithful reenactment of a pivotal battle when your head Squatsch Sergeant is on the other side of town and he’s the guy with the enchanted crystal Burpon.

For the underinformed, the official title of this festival is “Lucca Comics and Games”. The Games part is big. All the major video game designers are present hawking their wares along with all of the fantasy card games, board games, and action figure games. I even saw a few guys squatting in semi-hiding behind one of the tents playing a craps game. I suppose they were embarrassed ‘cause their game is so old fashioned and has only two moving parts.

Along with the games territory comes the opportunity to get oneself dressed up as a favorite game character, especially if oneself is a girl between the ages of 15 and 20. There is even an entire area of the pavilion devoted to this activity called CosPlay, a clever and catchy combination of the words Costume and Platypus.

As I understand this (and remember I am a 50 year old American male, not exactly the informed audience for this particular activity), in CosPlay you and your buddies get dressed up in your favorites fantasy figures and put on small skits. I saw some robots and Stormtroopers go at it with black painted papertowel rolls.

But in many CosPlay plays the play is merely a vamp. Mostly I saw adolescent girls dressed in skimpy outfits posing with each other, pausing in tableaux, and then changing poses and pausing again. As far as I could tell the poses were not slides in an ongoing storyline, but just cool poses. It seemed merely odd to me until I looked around and saw a bunch of old guys drooling with cameras waiting for the next tableaux. I got the hell out of there, pronto.

A woman explained to me that CosPlay is actually a very creative activity for girls because a lot of them make their own costumes and write their own skits. It was described as a healthy alternative to the kinds of mischief many teenagers get mixed up in. Maybe so, but as far as I could tell the Vampirella and baby doll outfits that these girls poured themselves into outnumbered the Amazons, Valkeries and Presidents of Germany as role models by 10 to 1.

Not all costumed festival-goers indulge in the regimen of formal CosPlay. They simply get dressed up and wander around. Mostly it is long black robes and painted faces, but I noted an interesting fad: The Big Object trend. Lots of Big Swords and I mean BIG. Big Guns, Big Lightning Bolts, Big Shields, and Big Carpet Tubes Painted Black also known as Big Things. Why the Big Objects? Well, holding your symbolic icon lets others know immediately who you are just like those ancient frescoes of the Saints that pepper the interiors of Italian churches. So, on the very same day in Lucca, I saw two guys with Big Keys. One was peeling on the church wall: St. Peter. The other was peeing on the alley wall: Sargon the Magnificent.

In the States I do not think that you would get very far from the parking lot without someone making a big stink if you came dressed up as a girl in a black bikini scrambling around on all fours attached to a leash held by your black-faced boyfriend wearing black paper mache ram’s horns. I later learned that the boyfriend was one of my cartooning students from the Scuola di Comics in Florence. I am going to look at his work a bit differently from now on.

I guess the weirdest costume, though, was the guy in torn jeans and a tee-shirt who had a large metallic pyramid for a head. When I mockingly described this to my students they looked at me like an idiot and solemnly explained that he was dressed as a magic talisman from a game that everyone knows about a duh.

The antics of these dolts prancing around are all so silly and ridiculous. Look, I generally let my fellow man live his or her own life. I am tolerant if someone wants to spend their time and money participating in events like Nascar racing or Pet Shows. But Gaming?! I just don’t get it. Why don’t they devote themselves to something really important like, say Comics?

There were several huge white tents filled with comics vendors. I sat in the Coconino Press table because I am lucky enough to have my book, City of Glass (co-created by the great David Mazucchelli), printed by an outfit called Coconino Press. Coconino Press is an oasis of decent comics in Italy (meaning: they print stuff I like). The best thing that can be said about most Italian comics is that they are called ‘Fumetti’, or “little puffs of smoke” based on the design of word balloons, I suppose, but maybe it was someone’s idea that they should all be burned. (Hmmm…I think I may lose some friends, here.) Anyhow, let’s just say that of all of the 9 or 10 editions of ‘City of Glass’ the best and most beautiful by far is the one published by Coconino Press. (Oops, there go a few more friends). Plus I get to say the word “Coconino” a lot and it’s a fun word to say.

The Coconino boys sold a hell of a lot of books at Lucca. Foremost among these books was one that debuted at Lucca called “S” by the cartoonist, Gipi. As I have said elsewhere in this blog, two of Gipi’s short books are available in English from Fantagraphics )http://www.fantagraphics.com/ignatz/ignatz.html) and I won’t invite you to my birthday party if you do not buy these books right now and read them. I wondered why the seat next to Gipi was always vacant whenever I came back to the booth from my regular cappuccino breaks but after a while I realized how demoralizing a location it was for another author. It was not merely that everyone on the planet seemed to want this book (while I had to bribe several students to even come by to even say hello to me). No, the painful part was watching him, out of the corner of my eye, dash off one beautiful watercolor illustration after another with such ease. If I didn’t love this guy so much I would hate him.

Coconino invited another American, R. Kikuo Johnson to Lucca to sign copies of his swell debut book, “The Night Fisher”. Kikuo is a smart and good-humored fella who also draws well. We snuck out at sunset to climb one of the two towers remaining inside the city to look at the other tower. People in the other tower were doing the same. It felt like one of those surreal wordless French gag cartoons from the 60’s. Kikuo likes the Jack Kirby of the Big Ant era while I prefer Jack Kirby of the late Captain Victory era, and if you know what that means God have mercy on your sorry soul.

On the train headed back to Florence I was getting ready for a very important nap (what the Italians call a ‘pizzolino’, another word I love to say), an activity that Italian train seats are ergonomically designed to discourage, when a couple got into the seats across from me still buzzing from their thrilling day at the festival and anxious to talk to someone about it, even if that someone only understood about 12% of the Italian they were speaking.

For them, it was the best festival, ever in the universe. And I think they really meant it, too. You see, he was Kaloo from Kabu (or Kabu from Kaloo, I never quite got which) and she was his mortal enemy, Cassandra, from Plowman’s Planet. They were usually mortal enemies, but they had buried the hatchet for the Lucca Festival to demonstrate that interplanetary brotherhood was possible. After a while they gave up trying to talk to me and cuddled shamelessly. She caressed his spiked tail as he whispered sweet nothings into one of her six ears.

Where’s that guy with the Big Key? Lock me up, Scotty. 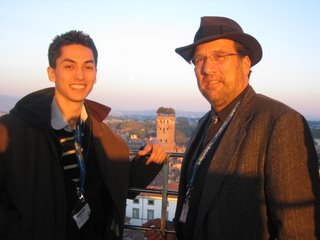 Who watches the Watchmen? R. Kikuo and me, that's who.
Posted by Paul Karasik at 1:21 PM

I had some problem and had to go in Calabria.
I'm sorry...
hope to come back soon and meet you another friday.

See you next week, but let me know for certain by Thursday afternoon.

See you then, Vincent.

We threw his sorry ass in the hoosegow prior to the festivities.