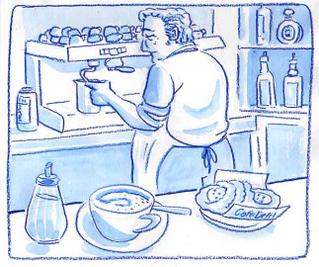 Rule #1 Beware of the pasta
Whenever I told one of my chums back home that I was going to live in Florence for a year they would inevitably make a comment about how wonderful the food is as they removed the knife they had stuck from in between my ribs. That wine! That olive oil! That pastry! Yes the wine and the olive oil are terrific and I have consumed gallons since coming to town, sometimes separately, and sometimes, as some guy named Luigi, whom I met in a bar called it, “Florentine-style”: equal parts Chianti and olive oil in a ceramic tumbler with a donkey painted on the side that is glugged down in one breath while everyone in the bar laughs hysterically. I did not get the joke, but then again, I am an American and much Italian humor is lost on me.

But listen up: beware of that pastry,

Evidently the Italians put an extra secret ingredient into their pastries. My wife thinks it is the high quality of the butter procured from contented cows grazing on sweet, rich Tuscan grass. My daughter goes for the theory that it is the fillings made with real fruit and real cream that makes the difference. I lean towards the hypothesis that heroin is involved. Nothing else could explain the addictive quality of these innocent-looking little depth charges.

Our apartment is a thirty-minute walk to the central area of town known as “Centro” (which roughly translates as, “Central”). Our neighborhood, known as “Monte Uliveto” (which roughly translates as, “Monte Hall”) is on a steep hillside with a swell view of the city below. To climb up the hill requires stamina, willpower, and an extra lung. Since moving here, I have made the climb at least two times daily and would have lost 15 lbs already had I not just come from my two daily trips (at least) to the local bar.

A bar is a place where you can get a drink, as in an American bar, or a coffee, or if that guy Luigi is around, a Florentine cocktail in a donkey mug, but all I get at a bar is a cappuccino and one of those sweet filled pastries that they call a “pasta” not to be confused with “pasta”. Even though they are exactly the same word and designate a food substance, pasta is not pasta.

How the Italians keep their pastas straight is a mystery. Maybe it has something to do with pronunciation. I guess my accent must be pretty good ‘cause after ordering my cappuccino when I say, “Una pasta, per favore,” to the barkeep, he never ever slaps down a plate of linguine with clam sauce. These pastas look much like the innocent little pastries from home that I have no trouble avoiding. But here, with their secret additive, they are my destiny, as Paul Anka once sang, they are what they are to me…heroin in a flaky crust.
Posted by Paul Karasik at 2:13 AM

Evan and I have enjoyed reading your Florentine Blog tonight. Evan hopes you don't come home looking like Curt Cobain after all those "pastas." Your illustrations are a refreshing change from the oft' used digital camera snaps. As an aside, we, as a family, are totally in love with Forever Wild's Shack. We had a great time on the island and it was a pleasure to meet Cleo.