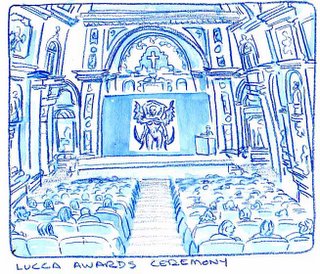 a) Lucca is a charming town nestled in the Tuscan hills and surrounded by a magnificent ancient wall.

b) Lucca is a charming town nestled in the Tuscan hills where grown men and women run around wearing cardboard wings, swinging plastic sabers as they stage battles just outside the magnificent ancient wall.

Lucca is probably the only charming Tuscan town where mom and dad can bring Jeff, Jr. and they will all find something that they will like. Dad will go for the magnitude of the walls surrounding the town, which will make him ask himself if he remembered to activate the alarm to the bike shed? Mom will be enchanted by the statuary and architecture, which will make her ask herself why she has been in Italy for a week and still not bought a pair of shoes? Jeff, Jr. will dig the guys dressed like barbarians and the babes in bursting leather and ask himself why go back to Passaic?

We were warned by the frank description in the guidebook that the citizenry of Lucca are not your typical warm and welcoming Tuscans. Other towns had walls, too, but over the centuries they realized that the days of invasions were over and dismantled the walls, using the bricks to build useful things like McDonald’s (which, of course, only served to renew the modern assault). I asked an elderly woman at a bus stop directions to San Frediano. Slowly she looked me up, she looked me down. Barely parting her lips she explained how to travel all the way across town and all of the landmarks I would see along the way. This detailed description was delivered at what astronauts call “Mach 10” and what we call, “Mach incomprehensible”. She then gave me another slow up and down to make sure that I did not understand and that was that, thus showing me that she not only knew the way to San Fred but that I was an idiot.

Don’t get me wrong, after a weekend in Lucca, I believe that they have done the right thing by keeping those walls intact and showing hostility to tourists. In fact, I think that they should install a guard with a clipboard at every portal to present each visitor with a questionnaire.

Who’s faster Superman or the Flash?

a) Out of my way I am late for work.
b) What’s the Flash
c) Well, that’s an interesting question. Of course, since both heroes are members of the D.C. Universe, this question has popped up from time to time. In # 176 of The Flash the two guys had a race but it was a staged to distract Sinestro from blowing up the world by tricking him to bet all his money on the Flash to Place. A few years later, the issue was raised again in The Justice League of America #233, but this time both Superman and the Flash rode horses because they were complaining that their girl-friends, Lois Lane and Iris West, were not paying them enough attention and since everyone knows that girls like horses, maybe they would come to the track to watch the race and go out for coffee afterwards with the two mighty heroes. They vied for the title a third time in Adventure Comics….etc., etc., etc….

Once a year the town of Lucca plays reluctant host to thousands of comics and video games fans. This is reason enough to keep those walls standing and to give strangers wrong directions. In Italy it is the largest comics festival. This requires a revision of the word “festival”, which one generally associates with confetti, gayety, and snappy trumpet music. This Lucca “festival”, one generally associates with pimples, body odor, and lengthy, frank, soul-searching discussions about who is faster, Superman or the Flash. On top of this many, many participants dress up as their favorite genre characters, This can make getting down the aisle to find a cup of coffee like running (or, rather, crawling) the gauntlet. A pair of paper mache wings knocked off my hat and when I reached down I tripped on a devil tail. Rising to my feet I had my eye poked by a metal spike affixed to the tip of a leather bustier. Some fun, this festival.

The awards ceremony for the big festival winners (Best artist of the year, Best game of the year, Best Playstation sound effect of guy’s head getting ripped off of the year) takes place in a church. Yes, a church. But not some dinky storefront joint in a dilapidated suburb. This is your high baroque style church with every square centimeter decorated with gold leaf and mosaic to the glory of God. They have ripped out the pews, however, and replaced them with nice plush auditorium seats, which is a good thing because it is very difficult to nap in wooden pews and sleep is required to make it through the endless ceremony. A stage has been constructed at the apse. There, projected onto a huge screen where the altar once sat, was the logo of the Lucca comics festival: a glowering female warrior figure with six arms most of them holding weapons but at least two of them holding her cantaloupe breasts. I am not a religious man, but I memorized the exits should God decide to take any of this personally.

I attended the festival as a guest of Igort (he’s one of those guys with one name, although, when you meet him he seems like one of those aristocratic guys who should have three names), the Italian publisher of Coconino Press who have reprinted the comics version of Paul Auster’s novel, “City of Glass” that I made with David Mazzucchelli. Despite the fact that it is named after a dirtswept town of 122,754 in the middle of the Arizona desert, Coconino publishes very, very beautiful books, so beautiful, in fact that I proposed marriage to a copy of Marti’s “Taxista”, but my wife caught me and hit me over the head with an equally beautiful copy of Matt Broersma’s “Insomnia”. The artists who draw these books are a soft-spoken lot and very friendly. Although only a few could speak English we bonded instantly upon meeting by giving the universal cartoonist’s secret handshake: shake a moth out of your otherwise empty wallet and cry on each other’s shoulder. We sat in a line with pencils, pens, and watercolor sets and spent the day inscribing books. I was the least well-known of the bunch and still personally inscribed at least 50 copies: “To my close personal friend, Dear Ebay winner”.


If you think that sitting in a stuffy tent all daylong inscribing books is a cool, prestigious activity that is good for the ego, you:

a) have never sat next to a booth blaring Playstation 2 sound effects of guys getting their heads ripped off for 12 hours.
b) have never had people walk away from you in mid-sentence when they realize that you are not your far more famous and talented collaborator.
c) really do think that the Flash is faster than Superman because of his performance Action Comics #567 where he went Mach-a-zillion and zipped himself into an alternate universe where regular guys wear plastic wings and the superheroes get to relax and drink cappuccino. 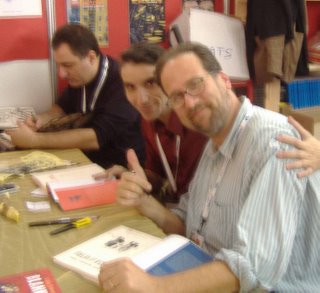 Igort, Gipi (they both have fine books out in English, buy them now), and me. 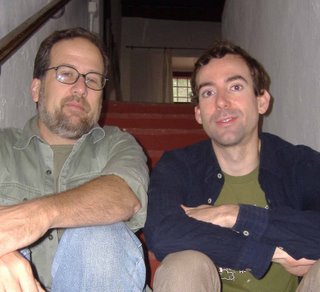 Me and Craig Thompson (not only has a hugely successful book in English but also is American, speaks English and seemed to understand most of what I said)
Posted by Paul Karasik at 2:59 AM

Paul,
I like the idea of a walled in City, just like Superman's fortress of solitude, as the place for a mighty and massive Comic convention.
Michael

I think that the residents would prefer more solitude within their fortress.
-p