Rule #10 You are how you dress 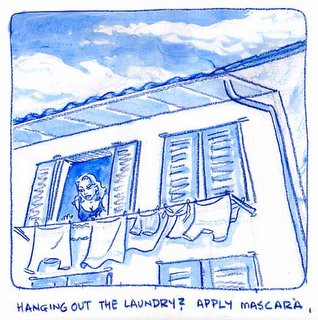 Contrary to the natural human inclination towards vanity, when you walk the streets of Florence you must dress down, or, better yet, dress dorky. This is tough to do when you are surrounded by Florentines, as they always look sensational. Make-up is applied to the Florentine female face tactfully, discreetly, and several dozen times daily. Taking out the garbage calls for eyeliner. There is a kind of tradition in Florence of getting a bit dressed up after dinner and strolling around town smiling at other sensational and satisfied Florentines. They even have a name for it: “Il passaggiata”. There is a kind of tradition in my house of digging a trench in the couch and pretending to read the newspaper until you fall asleep with your mouth open a minute and a half later. We even have a name for it: “Il passing out”.

So why dress down? For one thing it is hubris to contend that you could ever possibly keep up with the high standard of chic-casual gorgeousness that oozes from the pores of these people. But the real point here is that even if you were to pull off an imitation that might pass for fashionable on the dark side of an unlit alleyway at two in the morning, you would not want to.

You would not want to pass as a Florentine because then a real Florentine might then treat you like a fellow Florentine and that means talk to you. If there is one thing these people like to do it is talking (more about this topic later, I assure you, I would love to talk about it). And if they do talk to you, it is expected that you respond…in Italian.

The other day I was standing in line at the super market when an elderly woman asked me where the casaba melons were…at least I think that’s what she asked me…I was dumbstruck and did not know what to say, and if I did know, I would not know how to say it. Then it all made sense to me. The old bat was nearly blind! She could not see to whom or even to what she was talking. So I turned her in the right direction and gave her a little shove. You see, usually people take one look at me and see a tall American, possibly a moron, most certainly a dork. This is not only due to my height, build, skin color, and usual slack-jawed look of bottomless befuddlement, but also the way I dress.

When I say dress down, I don’t mean just put on your well-worn baby blue Old Navy polo (actually, if you do that you may very well be mistaken for a Florentine). No, when I say dress down so as not to be engaged in conversation, I mean: dress like me. From the top: bad haircut three or four months old, glasses that were barely stylish in 1983 when they were purchased, untrimmed facial hair, t-shirt that proudly declares you are a fan of “Porky’s All-You-Can-Eat House of Lard”, cargo shorts, each pocket bulging with, well, let’s just say “stuff”, mismatched socks matching mismatched shoes caked in dog poop. It works, friends. Waiting at a street corner yesterday a beautiful young woman with freshly applied eyeliner looked up at me from her street map and then turned to my dog to ask for directions.
Posted by Paul Karasik at 2:18 AM