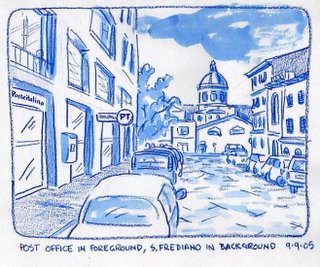 9. Think twice before sending a package.


The Post Office in my neighborhood glistens. It shines on an ancient street with the venerable dome of San Frediano in the background. The P.O. displays lots of chrome and glass and an electronic number dispenser that makes a beep when you take a number. Taking a number is important because it gives you time to go down to the corner, have a cappuccino, get a haircut, read the paper, do the crossword puzzle, get another haircut and do your grocery shopping without losing your place in the batting order. It is not so much that there are lots of people waiting to do business in the P.O. It is just that on average each transaction takes the length and contains the same amount of drama as the first act of La Boheme.

Now there are plenty of mornings of my life that I have given up willingly over the years: watching reruns of “Our Miss Brooks” when I was a squirt, that year-long double period of Mr. McCorn’s 8th grade Geography class (where Mr. McCorn had the audacity to teach about the doldrums and not mention his class by name), sitting for hours outside Desiree Talbot’s dorm purposefully not drinking out of my coffee cup so that it would look like I had just happened to sit down. But nothing compares to the void that you feel between your ears and in your soul as you leave an Italian post office after sending a package.

Back in the States, the USPS emits some red-tape but basically, you go into the P.O. fill out a form the size of a 3 X 5 card get your package weighed, pay, and go get a cup of coffee (yes, in a paper cup). Italian postal red tape is twice the width and twice the strength of your average duct tape. The poste clerk shot off many questions regarding the weight and contents of the package I wanted to send. In some of these questions I even understood a word or two and nodded as if I understood and agreed with each syllable. I am such an agreeable guy. I am also hell bent on not looking like a complete dolt, but, of course, a dolt is exactly what I appeared to be: nodding my head up and down vigorously, repeating “Va bene, va bene, va bene,” and wearing a grin borrowed from Alfred E. Newman. Based on my nod rate per second I was given a certain number of forms to be completed…all in triplicate. The perforations on the forms gave away the secret: they were actually printed on toilet paper. If you press down with any vigor, they shred, but if you don’t press down hard enough you may find yourself doing all of the triplicate forms individually…believe me. I stood by and watched Marsha go through writing the same info three times while receiving a blitzkrieg of deadly ice pick stares from those waiting in line behind us. I fended these stares off with my bold and manly defense: basically a stupid grin, a shrug, and a look that attempted to distance myself from my wife as much as possible while still holding the package with my fingernails as she affixed the label (a look of Matrimonial Mutiny that is admissible in a court of law as grounds for divorce in Idaho, Missouri, and the District of Columbia).

Dripping sweat and in desperate need of another cappuccino, as we left the Post Office, we wondered why this necessity for different forms, different stamps, and different classifications. I suggested that it was about employment, that somehow giving people more work to do gave them a greater sense of importance and duty. Marsha’s point was that it gave some kind of order to the Italian world that is more organic by nature. My sister, who has had much more contact with the Italian people than I, maintains that in the Italian view, the worth of any transaction between two people is valued based on the length and the quality of discourse and contact. In other words, no matter how many people are waiting behind you in line at the butcher, the longer you talk with the butcher regarding the quality of the chicken you are purchasing, where it was hatched, the weather, your family, his family, anything, the better the chicken will taste when it finally gets to the table.

Following this line of reason I imagine, after going 10 rounds in the ring with the Poste clerk, that my little package is not in the dark chilly cargo hold of some greasy freighter, but snuggled in a luxurious first-class leather lounger. And as the stewardess kindly turns off the reading light, my little package murmurs in it’s sleep, “Va bene, va bene, va bene.”
Posted by Paul Karasik at 2:56 PM

woah so do people like hang out and party while they wait to mail thier like stuff? dude that is so totally and awesomely radical. How do you like your two smokin' hair cuts, is that like the new thing in italy? to get two haircuts in one day, does it like double your chances of looking cool? woah I have to try that. Thanks for the awesome suggestions paul

all about news and such said...

Oops! What a dope I am! All this time I thought I was writing about Italy! Mia culpa! Please go back through this entire blog and replace "Italy" with "Costa Rica", and "Florence" with "Mal Pais". Grazie...I mean, muchos gracias!

all about news and such said...

This page is fantastic, what you show us is very interesting and important, do you want to see something more? Look: Great investment opportunity in jaco bay, jaco beach, jaco beach costa rica, Visit us for more info at: http://www.jaco-bay.com/