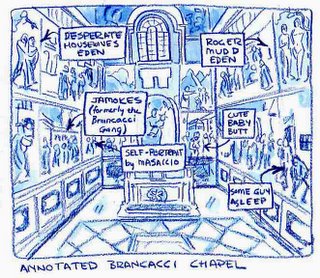 Sooner or later I had to give you some advice about viewing art in Florence. Some folks think Florence and they think: “Uffizi”. Sure, if you are looking for quality of amazing art plus quantity, the Uffizi is the place. One room has so many paintings by Botticelli, that they have given to simply hanging them on hooks on top of each other. And don’t miss that pile of Michelangelos in the corner of Gallery 763. Some snobs dismiss them as lesser works but I suggest that you rifle through that bin and keep your eyes peeled for a charcoal study of David. It’s neat!

Should you choose the Uffizi, remember, that you must divide the sum of quality plus quantity by the wait factor, which is proportionally multiplicable by 7 if you are standing in line with anyone under the age of 16. While standing in line at the Uffizi, women have been known to go through their entire menopause cycle. However, some visitors feel that the show outside the Uffizi (musicians, jugglers, young women in halter tops and some truly first-rate pickpockets) is better than all that boring crap hung on the walls inside. If you are budgeting your art viewing time due to the fact that you would rather spend your precious hours in town buying fine leather goods, doing a test survey of every gelato stand in town, and having the breathtaking experience of negotiating a good price on a pair of sunglasses from a street vendor, may I recommend a trip over the river Arno to Santa Maria del Carmine. Everything that you need to know about Renaissance art is in one little chapel in this church. You can go there, see it, get it, and then go back to looking for a swell pair of shoes which is really the reason you came to Florence in the first damn place.

Granted, there are no Boticellis at Santa Carmine, or any Michaelangelos. But take it from me; if you’ve seen one Michaelangelo, you’ve seen ‘em all. I saw that Mona Lisa he did, waited an hour and a half, and you could barely see it through the glare of the protective glass. So I bought a t-shirt of that other painting of his, y’know, that swirly one, “Starry Night”, and when I want to see it, I put on the t-shirt and stand in front of the mirror. Of course it’s backwards, I know that, but if I take a digital picture of me wearing the shirt and hold that up to the mirror, it’s as good as the real thing except it’s in my house where the beer is free and you hardly ever have to stand in line to go to the bathroom.

Santa Maria del Carmine is a hike across the Arno and down a few side streets. It is a church built by the Carmelites, an order begun by a bunch of dissatisfied and overweight Christians looking for a non-fat substitute for Carmel Regular. It’s a bit off the beaten path so it is rarely crowded. You buy a ticket and are ushered into a dark room where they play a really cool movie. The movie begins with a computer animated segment of the church slowly catching on fire back in 1563. It shows the tiny little embers slowly turning into flames and quickly spreading up the wooden posts and beams until the whole thing comes crashing down in an enormous roar of special effects. It was very cool. I imagine that there was some other cool stuff in the film, too. But after the fire cartoon, some art historian began to talk and I fell asleep. Hey, I was tired from the hike across the river and the five gelatos I slurped on the way over.

After the fire they rebuilt the joint, but amazingly enough, one could even call it a miracle, the Brancacci Chapel survived. The Brancacci chapel is the reason you take this hike in the first place so it is a good thing that it survived. “The Life of Saint Peter”, frescoes in the Chapel were commissioned by a neighborhood merchant named Felice Brancacci. I guess that’s why it’s called the Brancacci Chapel, huh? One of my favorite factoids about these paintings is that when Brancacci “fell out of favor” with the church they erased all of the portraits of him and his pals from the walls and replaced them with some other jamokes. I am still researching what exactly he did to fall out of favor but evidently it wasn’t quite enough to change the name of the chapel to the Jamoke Chapel. Brancacci hired two painters to do the original work, Masolino and his student Masaccio. While they were both hip to the changes that had occurred in the art racket since Brunellesci had discovered perspective, Masolino clung to the traditional style of showing figures posed stiffly full frontal, while that upstart Masaccio, had his figures showing emotion in pose and expression. Think: the “C.B.S. Nightly News with Roger Mudd” versus “Desperate Housewives”. Thus in a single chapel area you experience a major turning point in Western Art. Masolino painted Adam and Eve in the garden of Eden on one wall, erect and serene, while directly opposite them, conveniently considerate of future generations of tour guides, Masaccio shows the two being evicted, bent over and full of anguish. A third painter, Filippino Lipi, whom, I understand was not a Philipino at all, came in to pinch hit when these two other guys failed to finish (O.K., O.K., Masaccio died and Masolino was too old to make the trip across the Arno every day). His work is also very good, but I would be hard pressed to tell you why unless you want me to put you to sleep and I know that you just want to get the hell out of here and buy those shoes.
Posted by Paul Karasik at 11:30 AM No comments:

Kidnapping is still illegal in most sectors of the world, so in planning your trip to Italy it is highly recommended that you get pregnant a year and a half in advance so that you can bring a small child with you. If you lose your wallet, passport and credit cards but still have an infant or toddler you are good to go. As the Good Book says, “…and a child shall lead them…straight into the Uffizi”. (Actually, just before we arrived here, a racket was broken up by the cops just around the corner from the Uffizi where small children were being rented out by the hour to tourists wishing to avoid standing in line for six hours waiting to look at some pictures by Botticelli.)

I first encountered this some years ago when my nephew, Theo, was still small enough to fit into one of those baby backpack thingys. The Medici Chapel is one of the most stunning structures in Florence and that is saying a lot in a town where my bathroom here is nicer than the brand new reading room at the public library back home. The Chapel is a hugely popular tourist attraction but my sister would not consider turning back when I pointed out to her that the line stretched out the door and halfway to Sienna. With Theo riding shotgun, the waters parted, the Red Sea of tourists drew back, and on we marched to the Promised Land.

My astonishment did not stop there. The guards inside were mostly Italian women of the Grandmother (or “Nona”) variety. One look at Theo and they dropped that severe scowl of Dracula’s Mother-In-Law that won them the job in the first place and became soft dripping mounds of tapioca pudding. I would be remiss in my duties as a doting uncle not to mention that Theo circa 1997 was extraordinarily cute when he was not howling his fool head off. Although he was on his best behavior that day (Judy had made sure to give him a double dose of soporific mother’s milk before we hit the street), even if he had been yelling his fool head off these old nonas would still have melted. Not only was he a toddler, but, he was also blonde, and he was a boy. My sister explained that this trifecta combination put Theo a furlong ahead in the cuteness derby. Have you ever seen a brick shaped elderly woman take a child’s hand and rub it up and down her whiskered cheek like a mini-mop murmuring, “Bello, bello, bellisimo.”? I have, friends, and let me tell you it is not a pretty sight. To this day, I believe that if Judy had not kindly, yet firmly wrested Theo’s sweet, pudgy hand away, that old bat would have chomped off each of his delectable little fingers one-by-one.
Posted by Paul Karasik at 5:28 AM No comments: