***
The most successful of my former students do not get jobs at DC, Marvel, or the gaming industry, but make nice and nasty, somewhat obscene, ratty-line self-published stuff. I am so proud of them!
***
I owe these fellow teachers, cartoonists, and dapper gents, R. Kikuo Johnson and R. Sikoryak my thanks for being the only guys nice enough to straighten my collar situation. 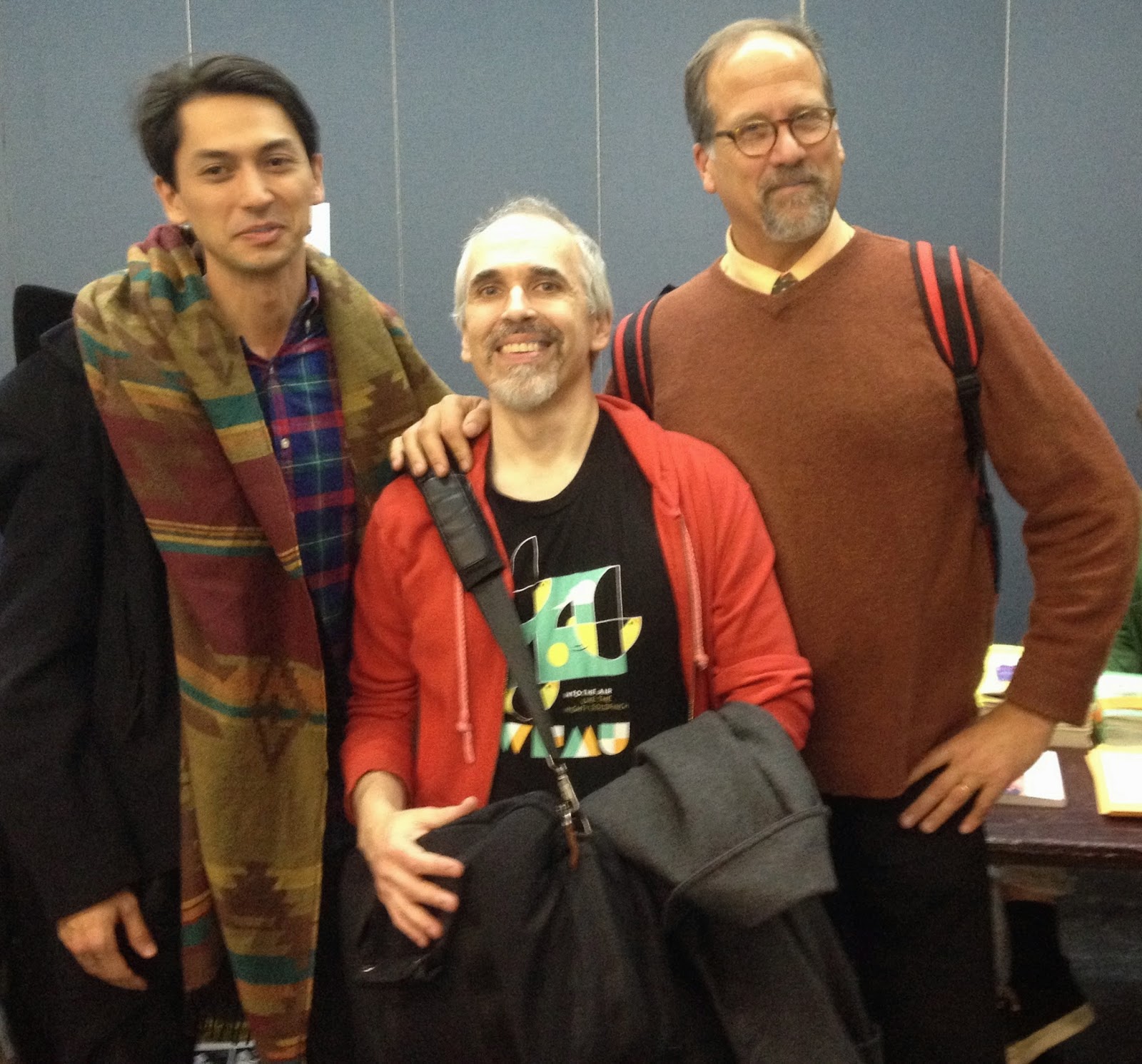 David Mazzucchelli went to CAB incognito. He dressed as his mom by wearing (I am not making this up) her old ski hat from the 60’s. Chip Kidd was jealous so I had to keep them apart.... 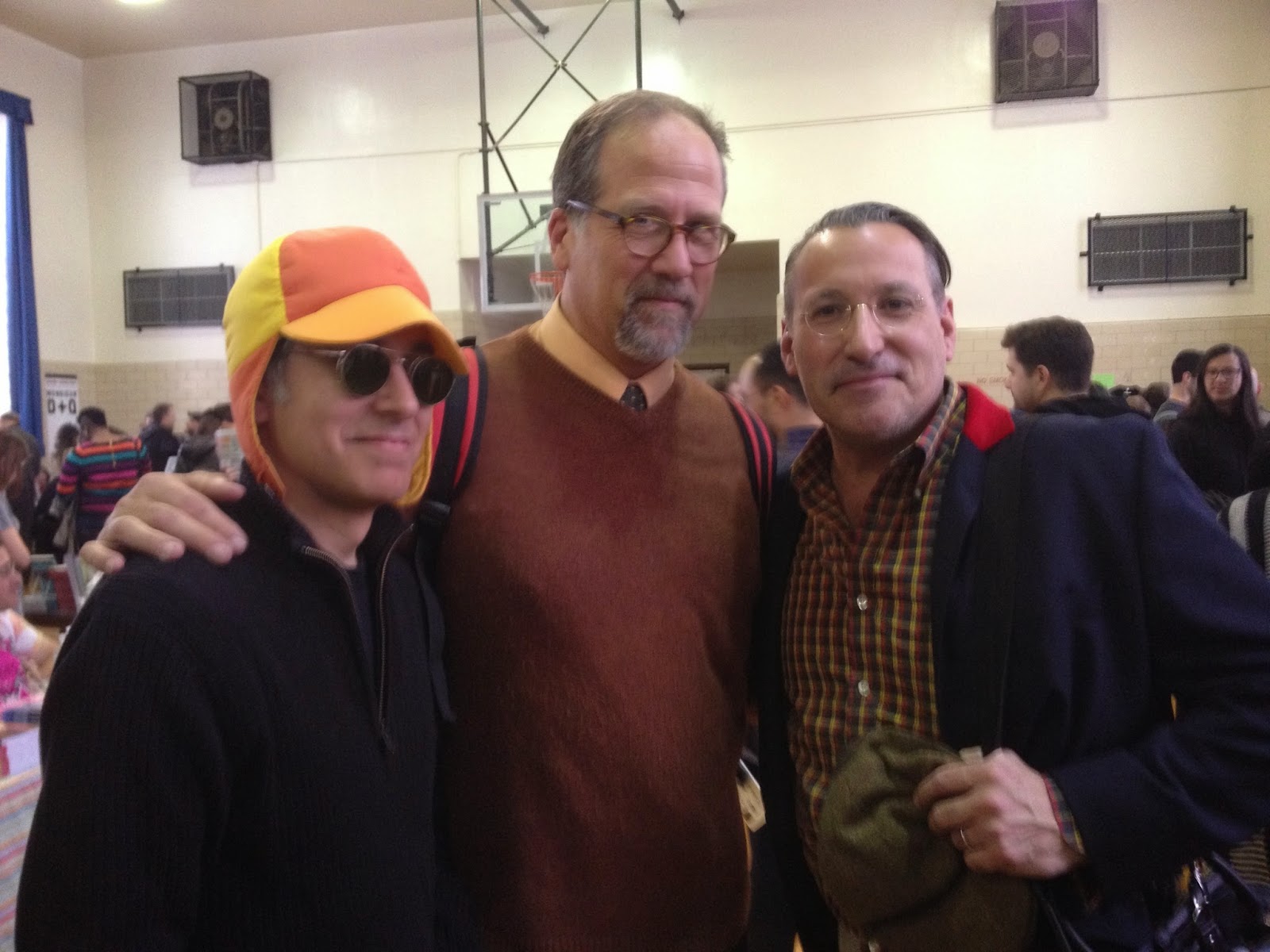 The green room was brick red. I got to sit between Al Jaffee and Michael Kupperman for a few minutes prior to Michael’s remarkable comprehensive overview of Al Jaffee’s career. It was one of the best of this kind of presentation I have ever seen and I hope that if I get to be 93, like Al Jaffee, that Kupperman will make a career retrospective of my work. If you like comics that are actually comic, do yourself a favor and get a copy of Kupperman’s books, "Tales Designed to Thrizzle". And Al Jaffee? I thought that if you are an icon it automatically disqualifies you from being a mensch. That Al! Never plays by the rules! 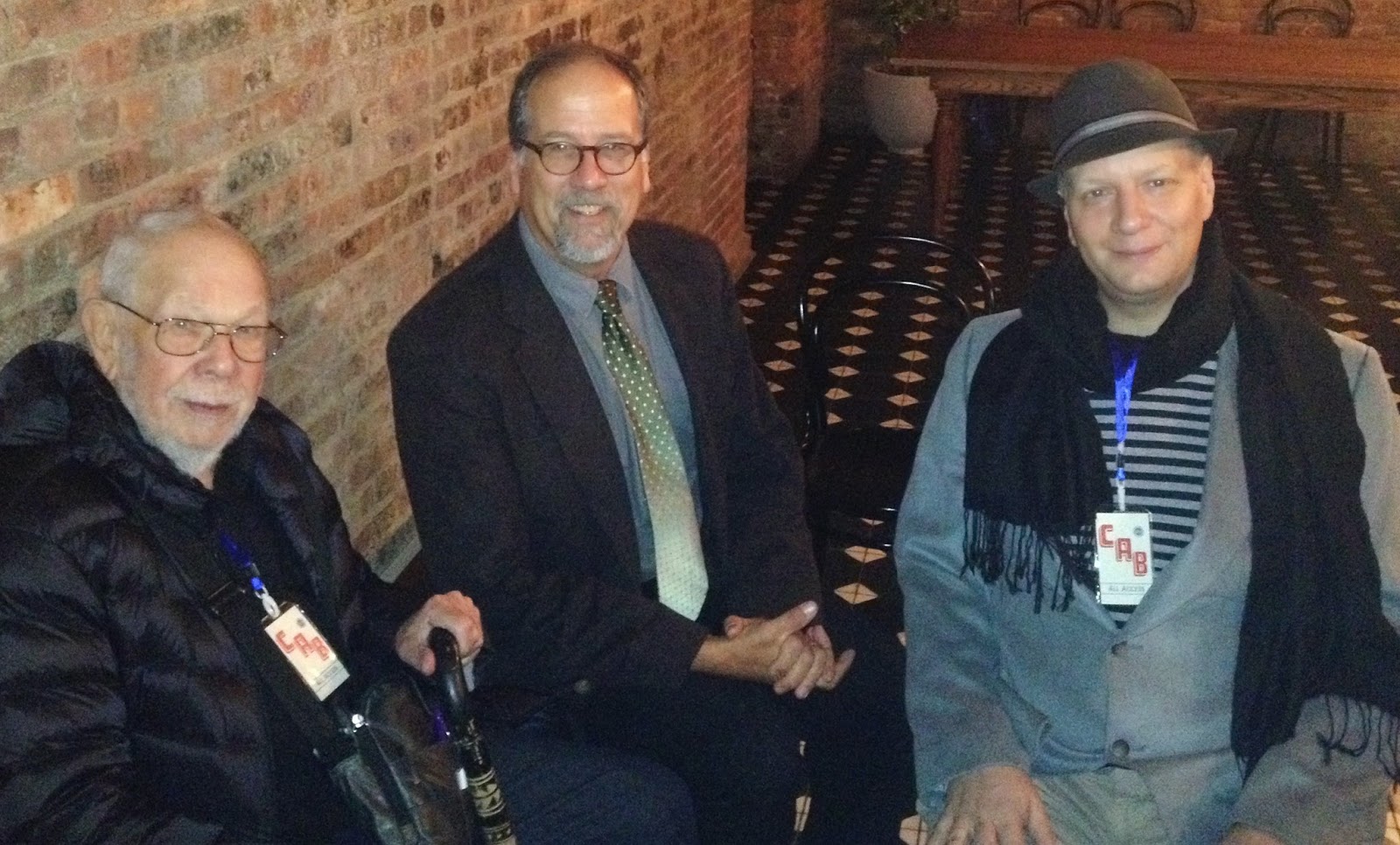 Karen Green is a librarian at Columbia University where she holds down the Ancient, Medieval, and, naturally, the Comics collections. Here she holds down a discussion with Benjamin Marra, Jim Rugg, and Tim Lane about stuff they like: wise guys and tough-talkin’ broads. 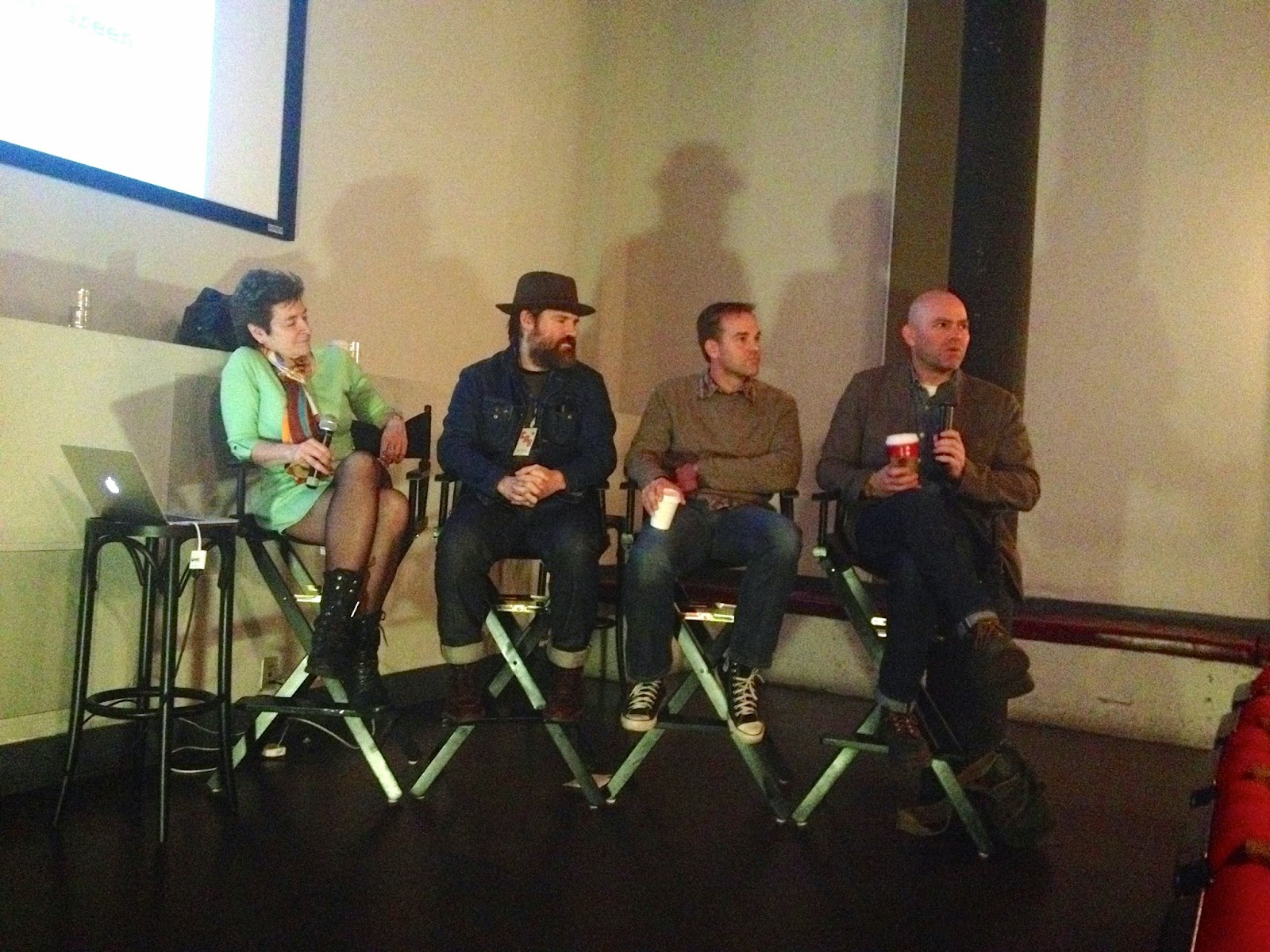 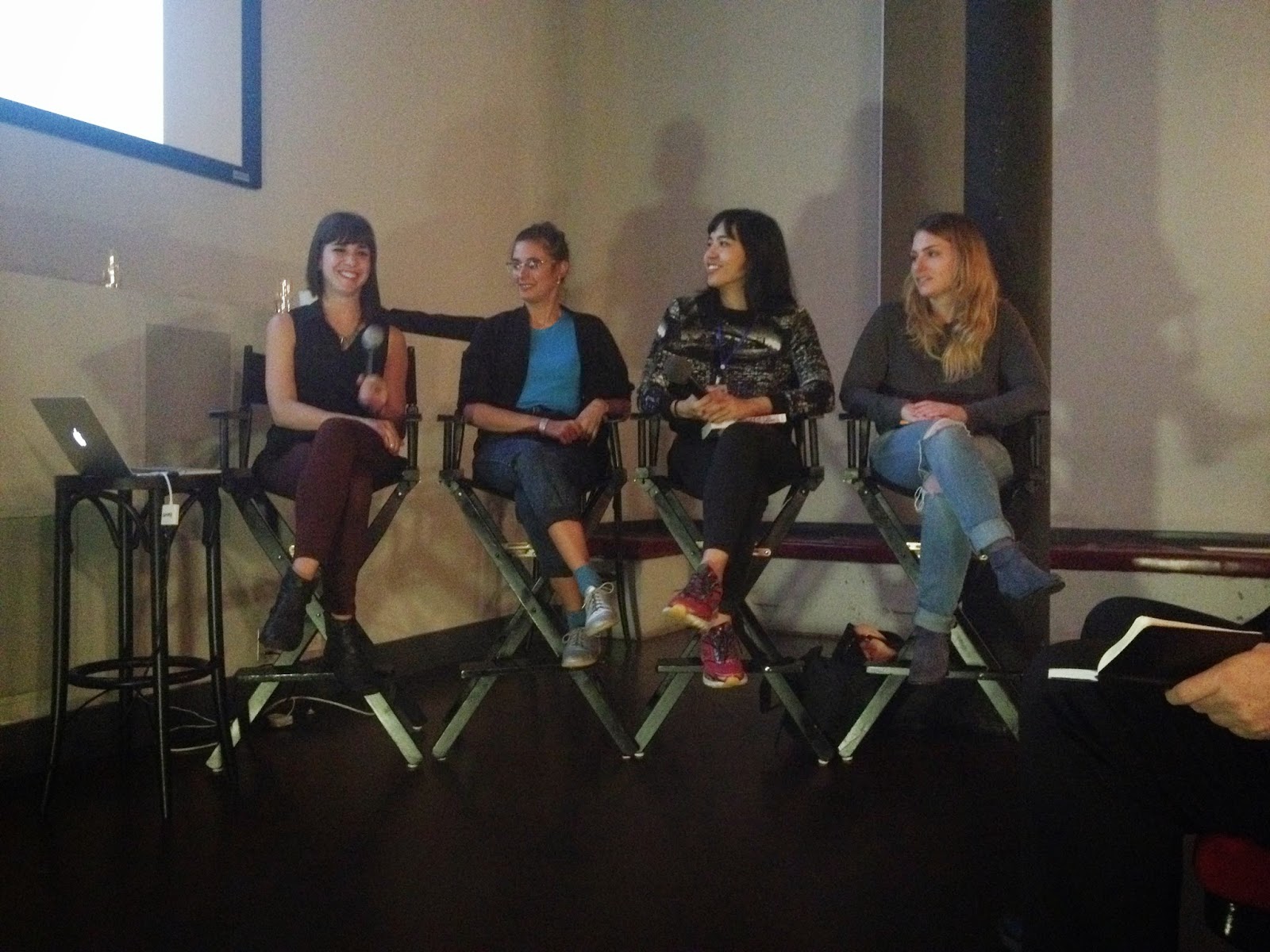 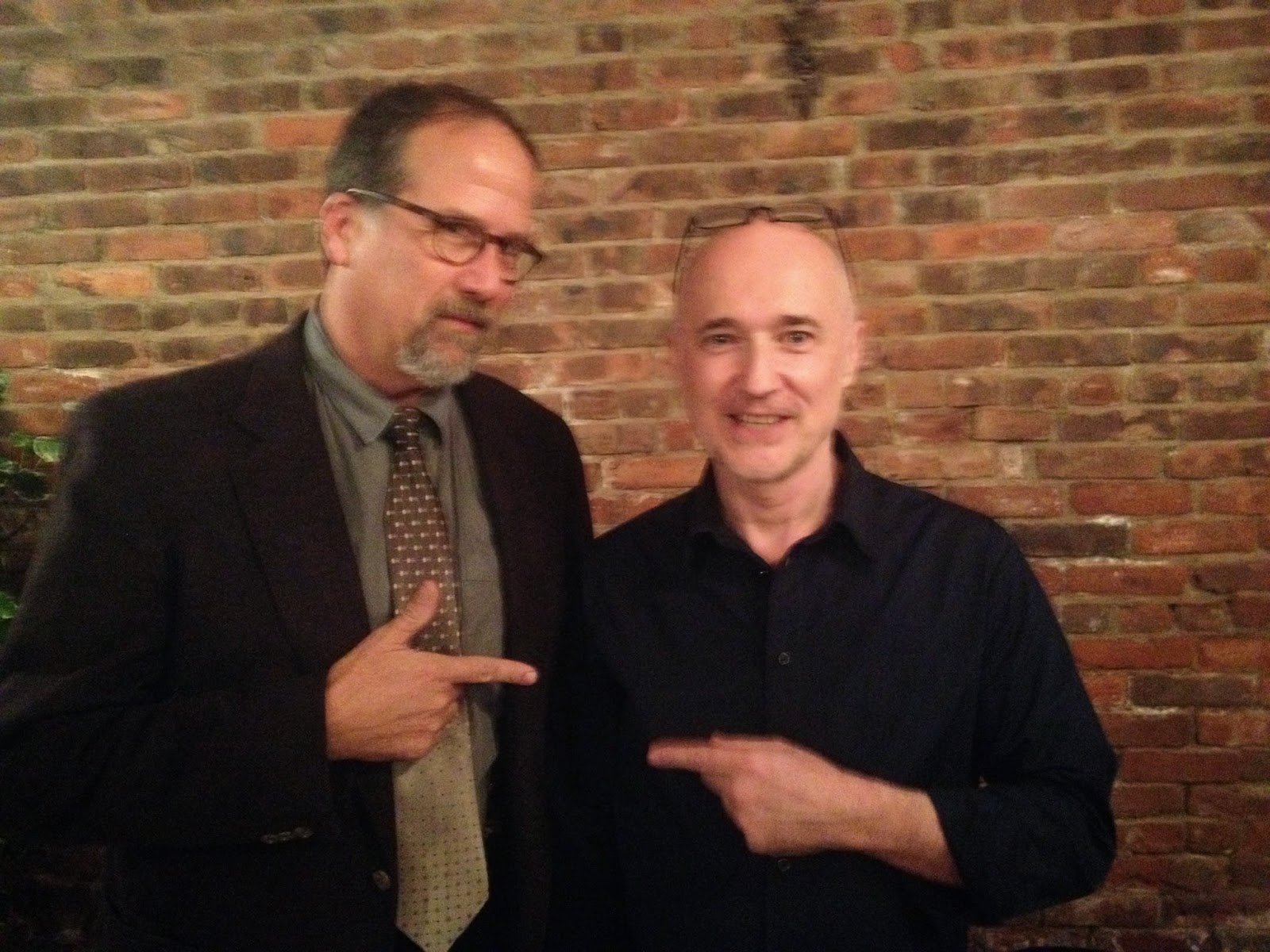 For the final presentation of the day, cartoonist Josh Bayer tried, without much success, to get a coherent train of thought out of the lips of Raymond Pettibon, who employs comics imagery in his profitable gallery work. Pettibon’s spontaneous ramblings enthralled fans and mystified non-fans.

Pettibon hit the ground dissing the many cartoonists and comics fans in the room by explaining that he could have been a cartoonist if he had wanted but, "I'm making more money than they are so they can suck on this."

Pettibon concluded with a demonstration of his ink technique by copying a Steve Ditko (I think?) drawing of Spiderman that morphed into a guy shooting up and sporting an enormous penis. Decidedly anti-censorship, he readily agreed on the spot to donate the profits from the sale of this original to the Comic Book Legal Defense Fund. 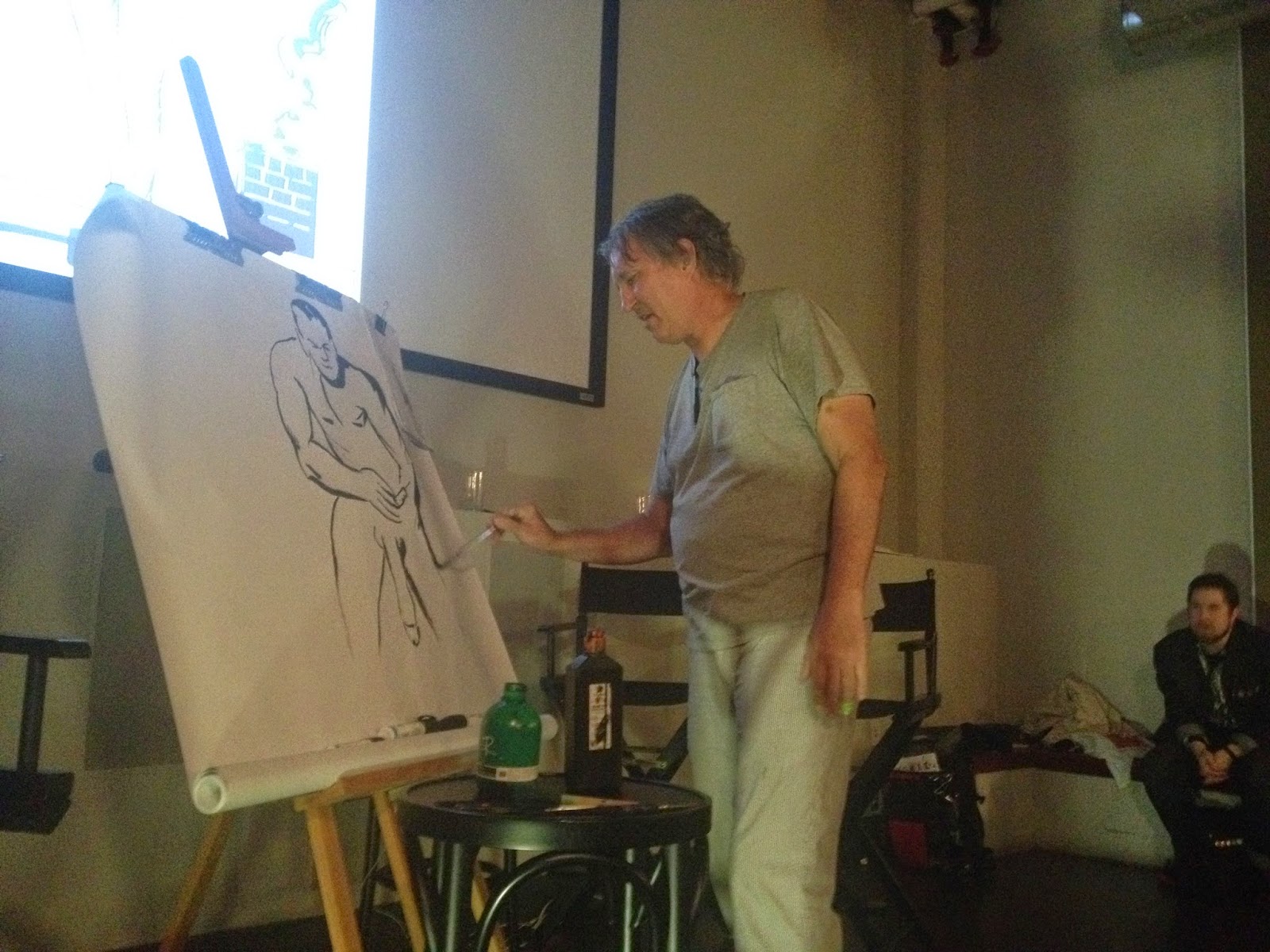 A few months ago, New Yorker cartoon editor, Robert Mankoff, ran a piece of mine on his blog deconstructing a Peter Arno cartoon:

I have written a follow-up piece giving Charles Addams the same diagrammatic treatment appearing in The New Yorker "Cartoons of the Year".

...and no need to remind me that E.B. White once said: "Analyzing humor is like dissecting a frog. Few people are interested and the frog dies of it." 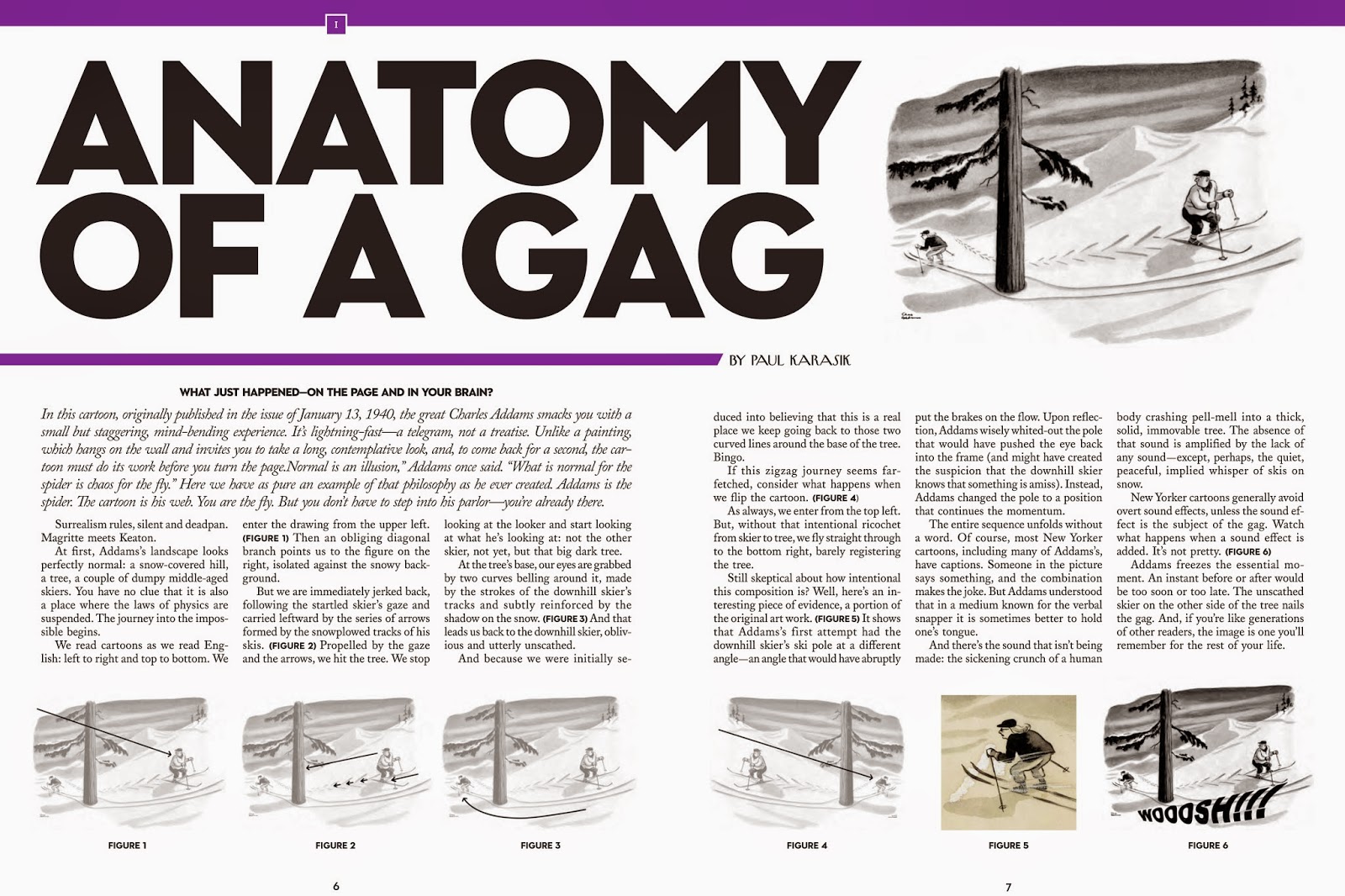 Posted by Paul Karasik at 10:17 AM No comments: