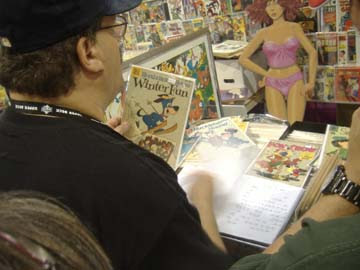 
By the time I arrived for my first day ever at the 38th annual San Diego Comic Con, admission for all four days was completely sold out. This resulted in a separate open-air mini-convention just outside the convention hall: The San Diego Ticket Scalpers Con.

Imagine, if you will, the circumstance where people are willing to pay scalper’s prices to get into this event. Bear in mind, this is not an event like, say a basketball final or a Rolling Stones Farewell-For-Godsakes-Farewell-Already concert. No…this is an event in which the primary goal is to siphon off as much from your Visa card without the wife finding out. What, you though the “Con” in San Diego Comic Con stood for “Convention”? Ha!

How can I begin to give you a picture of the enormity of this event? Imagine the largest airport you can think of. Empty it (except for Security). Refill it with hundreds of tables piled with plastic things and lots of people touching them. At first, I was overwhelmed by table after table after table laden with action figures, DVDs, video games, and, what else? Let’s see…oh yeah, comics. This is a Comic-Con, right?

After a while, I became less traumatized by the shear volume of stuff being hawked. 99.9% of what I saw I was not interested in. To be more precise, 99.9% of the stuff I saw I simply could not understand since I lead a sheltered life in a thatch hut in the woods. Electricity? What's that? Once I began to treat all of this merchandise as an endless continuous fogbank, I found that I could begin to find my way to the places I really needed to go: the Starbucks kiosk and the bathroom.

Lots of folks were dressed for the occasion: superhero costumes, devil horns, capes, this season’s latest Jediwear, fake-fur codpieces, and bikinis. There were a lot of people who looked like zombies, and then there were a lot of people dressed up as zombies. You could tell the latter ‘cause they trailed toilet paper and smelled faintly of ketchup.

I had on a tie and felt grossly overdressed. However, here’s a tip from the ol’ seasoned pro who has attended approximately one San Diego Con: Wear a necktie. A nice unlimited edition silkish tie from J.C. Penny’s secured the VIP treatment wherever I went. This meant receiving a hint of a smile to go along with a firm, “No sir, this is not an exit. Turn your sorry ass around.”

For many con-goers, attending the San Diego Con means achieving one of the biggest thrills of a lifetime: standing in line. Wherever I went I saw lines. Lines for sneak previews of coming films and T. V. shows, lines of outtakes from old movies and T.V. shows. and lines for the bathroom.

Since I have already mentioned them a couple of times, a word about the bathrooms at the San Diego Comic Con. I know that dozens of volunteers were hired during the course of the weekend to help direct traffic. I spoke to several and hung out for a while in the Volunteers Briefing Room out of curiosity and free snacks. They had volunteers manning the doors, directing traffic, refereeing light-saber duels, but unfortunately not a single volunteer on bathroom duty.

You would have to pay someone cold, hard cash to grapple with those Convention Hall bathrooms. Remember, this is San Diego where every third restaurant is Tex-Mex and the official food of the city is the chili-dog. It has been proven statistically that the more comic books you read, the more chili-dogs you are liable to consume. The cost of a pretzel at the Convention Center is higher than a mint copy of “Playful Little Audrey #67”; so many conventioneers get fueled up on their way to festivities each morning. Hence, the very least the Comic Con organizers could have done was to station a volunteer at each bathroom door to issue gas masks and disposable plastic wading boots.

Across the hall from where I was scheduled to speak there was a line of several dozen people waiting for a Q and A session with a T and A starlet who once played the well-endowed three-breasted Venusian from the third season of Battlestar Protractica. I passed another line that had clearly been forming for hours judging by the fact that most of the waiters were sitting on the floor. When I asked why, I was told by a Kingon that this was a line to get a (I swear this is true) ticket that may or may not allow the ticket holder to get an autograph of Stan Lee. I moved quickly on when the nervous Klingon, sensing that I might be trying to butt in, stuck a phaser in my gut.

A surprise came when I arrived at the hall where I was to speak about the golden-age cartoonist, Fletcher Hanks (Who he? Go to: www.fletcherhanks.com and buy a t-shirt for God’s sake), only to find it ¾ filled with people waiting to hear about this dead guy whose strange work has little relation to the computer generated imagery I had been bathing in all day at the Con. There must have been about 100 people in the room and none of them were related to me! The lecture went very well. They laughed at the right times and nobody tried to lynch me at the end.

Given the fact that my lecture had nothing to do with any video game and not a single Hollywood starlet appeared semi-clad on stage with me (although, believe me, I tried to find one), I was very pleased with my turn out, until someone pointed out to me that if there are 2.5 million fans in attendance at this Con that meant that about .000025% of all attendees came to my show.

When “my pal” mentioned this I recalled that indeed there had been several guys simply using my lecture hall as a reading room, and against the side wall there was a group engaged in a game of Dungeons and Dragons or perhaps craps, and several audience members were clearly there only to get a good seat for the next lecture (the Wonder Woman Wet T-shirt Contest), and one fella had taken off his shoes and was stretched out across four chairs in the front row snoring pleasantly, a half-eaten chili dog resting on his heaving tummy.

So what did the 2007 San Diego Comic Con leave me with?
1. A deep appreciation for the modern technology it took to create the triple paned windows in my hotel room that masked out the sounds of the freeway and airport.
2. A well-read copy of “Playful Little Audrey” #67.
3. A reconfirmation that a terrorist group need look no further than the San Diego Comic Con to make their case against the gross appetite of this wasteful culture.
4. A blue-green bruise in my gut from that Klingon’s phaser.
Posted by Paul Karasik at 1:03 PM 22 comments: