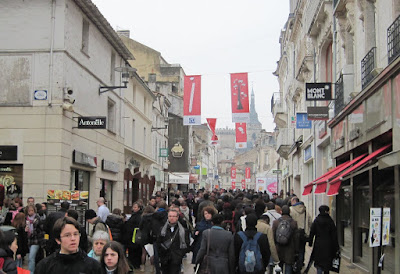 Many of those who annually attend have told me that this year’s comics festival in Angouleme was not a particularly memorable event. For me, however, Angouleme 2011 was a banner year.

It all began when I got off the plane at Airport Charles De Gaulle.

In an effort to shake off the global misconception that the French are a bunch of xenophobic snobs, the French government has arranged it so that all travelers arriving at DeGaulle airport are welcomed by their own personal café. The name of mine is, simply, “Paul.” This fine establishment offered a swell foie gras and smoked duck sandwich on decent baguette for under 4 euros, no kidding. Oddly, although I showed them my name on my passport, they still made me pay up. Those inscrutable French! 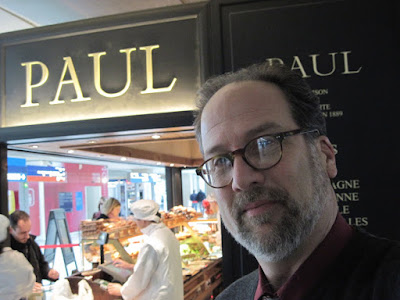 I arrived a week before the actual Festival began to teach at the Masters in Comics program at the European School of Visual Arts. As evidenced from the photo here, my personally suave brand of bon vivant American-style fit right in with my students’ continental hipness. You can see here in their eyes the deep respect and admiration which they held their remarkably hip teacher. 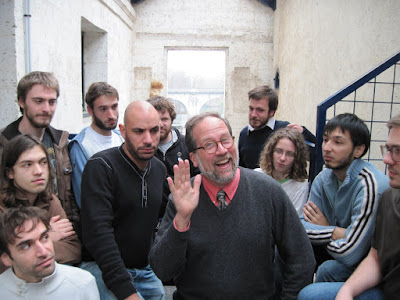 And look what they produced in four days: a 24-page mini-comic! This group really worked hard, even if they did not understand a word of what I was saying: 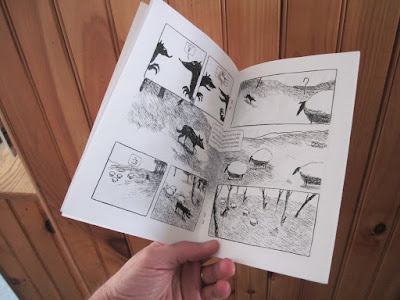 The profane marriage of “Commerce” and “Art” at Angouleme is not what you would call an egalitarian relationship. A good marriage counselor could make a quick euro here.

“Commerce” dominates. Huge tents are filled with vendors pushing product. Most of it is crap (stuff I do not like), though some of it is good (stuff I like). In any case, thousands of products and euros exchange hands during the three days of this Festival. Owing to the peculiar geography of the hilltop town, this hailstorm of commercial activity actually creates a swirling vortex that magically sucks bills and credit cards out of wallets as it brainwashes otherwise sane men into thinking that Tintin is one of the crowning accomplishments of human endeavor.

Meanwhile the neglected spouse, “Art”, in the form of artists’ exhibitions, events, interviews, and roundtable discussions appear randomly around town wherever they can find a space. The free map supposedly directing you to your destination is absolutely worthless (it was designed this year by Gracie Allen and Associates). Hence, you kind of stumble upon these little Art happenings if you’re lucky. Actual comic art, with no place in the center of the festival, displaces the ordinary living spaces of the local residents. I saw two elderly Angoulinians storming away from a church, murmuring and twiddling their rosaries in a panic because nobody had told them that twelve o’clock Mass had been preempted by a live Comic Art event: a Ninja draw-off between two manga cartoonists. 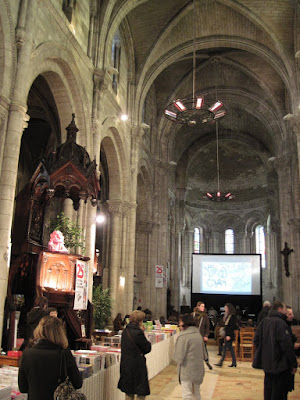 (Ha! And you thought I was making this shit up!)

Despite an acute lack of publicity, and a program that listed me as Paul Karazik some people whom I did not (exactly) bribe showed up for my event. The large sign outside the auditorium with “APPEARING TODAY: TINTIN!!!” written by me in crayon may have helped. I rolled up my trouser cuffs, applied an entire tube of gel to my hair to fashion a single spike, and tried to act as asexual as possible. This actually fooled a few near-sighted middle aged men who came up to me after my presentation, asked for my autograph and whether Hergé really was a bastard to work for.

Each year a select committee of comics insiders carefully throw darts at a wall covered with Post-Its bearing cartoonists’ names to choose the big-name cartoonist who will set the tone for following year’s festival. Baru was chosen last year so this year he got to set the tone and he probably also got to have a coronary from organizing the enormous retrospective of his work on display.

I loved the exhibition of his work, but not because of all the art on display. The room was dark and scary. Makes sense; lurking menace is a theme in Baru’s work filled with slightly grotesque and tortured souls fighting to survive and often just plain fighting. But too much work hanging in one room makes me queasy….my eyes begin to spin. One two-sided wall-hanging separating two sections of the hanger-like gallery displayed over 200 original pages. Impressive…but illegible as they stretched upwards into the darkness. 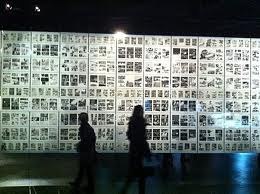 So why did I love the exhibit? Well, to evoke the semi-urban youth of Baru and the hoodlum pals he is so keen on depicting, they kindly set up an old pinball machine for heathens such as myself. Hoo-ha! I scored 2300 points on ol’ “Jack In The Box”! I went back for a second go at it the next day but the clanging bells drove serious gallery worshippers nutty so they unplugged it. Sad. 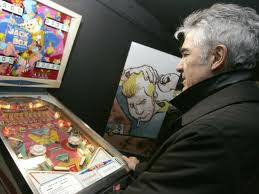 (Here is Baru hard at work. Sometimes he would actually let others play "Jack in the Box!")

Baru’s work tends towards the nostalgic and he grew up at a time in France when Rockabilly was making a big impact on the culture, shattering eardrums and domestic bliss, alike, as teenagers turned to black leather, slicked hair, and Coca-Cola.

Several days before the festival, small speakers began to appear on telephone poles throughout town so that during the festival, the tinny twang of Jerry Lee Lewis and Carl Perkins floated above the din of the comics-drunk attendees. It was weird to walk across the footbridge to the Musée de Bande Dessinée as Elvis wailed “Mystery Train”, but somehow entirely appropriate. Surrealism began in la belle France, oui?

I arrived at the Musée (what we in the U.S. call a “Bookstore and Café”) just as the dapper French cartoonist, Lewis Trondheim and his wife, the extraordinary colorist, Brigitte Findakly, appeared. Monsieur Trondheim makes it a policy not to sell his original work but the Musée really likes to have examples of work by all of the major cartoonists, and Trondheim is major. So they have come up with a very clever solution.

Each year Trondheim appears at the Musée with 10 pieces of art that he exchanges for the 10 pieces of art that he left there the year before. The Musée is kept well stocked with Trondheim originals and Trondheim does not sacrifice his originals and is granted visiting privileges. As an American, I found all of this kind of shocking. I mean, what’s the point if no cold hard cash exchanges hands?! 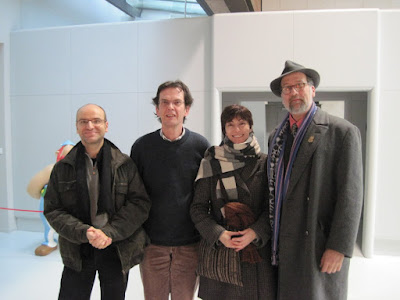 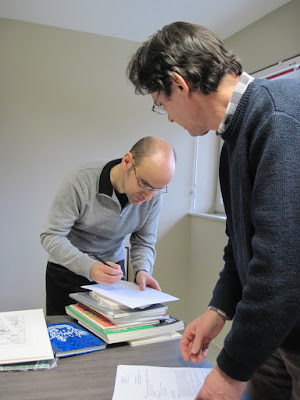 
It was really nothing for Jean-Pierre Mercier, the affable "Scientific Advisor" of the Musée de Bande Dessinée to invite me to view the extensive archives of the global collection of comic art throughout the ages. He, after all had the keys. For me, however, entering the triple-hermetically sealed vault required fingerprinting, a retinal scan, and the deposit of a vial of blood.

Unlike our primitive government, the French legislature actually supports and funds the arts including, evidently, this comic’s museum and the festival itself. They dump money at culture the way the United States government supports and funds the spawning of corn and weapons of mass destruction. Although the French have a couple of hundred years on us, there is still time to catch up…but first we must all start smoking again.

The Musée’s archive is lined with walls of flat files bulging with comic art originals and related ephemera. 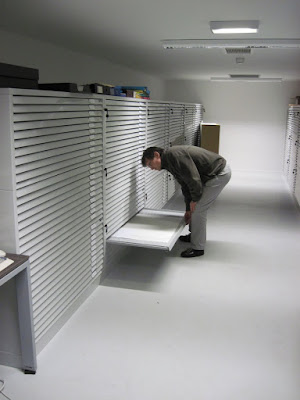 I drew up a wish list of work I was interested in viewing and Jean-Pierre made good. He is genuinely knowledgeable and enthusiastic about the work. In addition to Americans, including Herriman, Opper, Bushmiller, Gould all the way up to Ware, I was treated to some fine selections from a collection that is naturally Franco-centric. 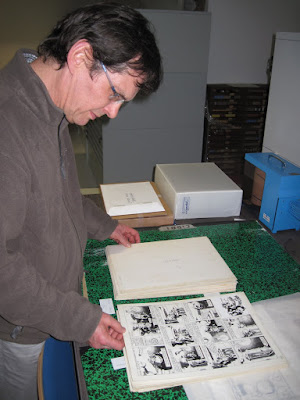 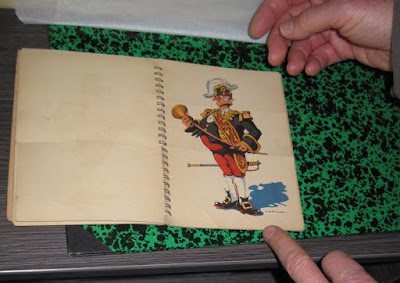 
The museum has a staggering collection by Calvo whose career only spanned 20 serious years during which he produced an astonishing amount of very detailed work and at least one masterpiece, “The Beast Is Dead” (if you are unaware of Calvo, Google-image him right now, I’ll wait.) According to Jean-Pierre, before she died, Calvo’s daughter reported that she had only one clear memory of her father: hunched over the drawing board.

But the object that Jean-Pierre is most excited about these days is a new acquisition, a small hand-made journal by one of the most prolific of all French cartoonists; Cham (he completed over 18,000 pages in his lifetime). This booklet is the mythical travel journal of a mythical explorer. It is a beautiful object and it fits in the palm of one’s hand…I know.

Upon leaving, they gave me back my test-tube of blood, but stripped searched me anyway. Please address all correspondence to the Angouleme Penitentiary, cell #313. 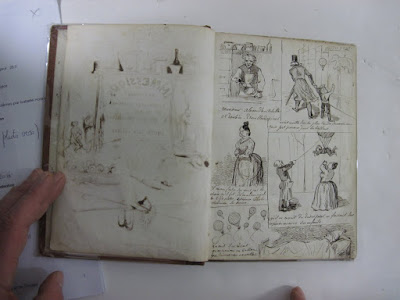