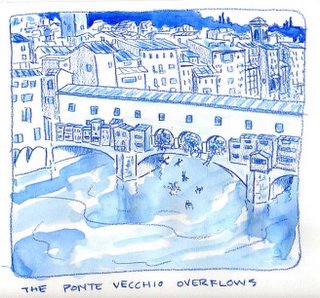 The Ponte Vecchio is the oldest bridge in Florence. The others were blown to bits in World War II to prevent the Allies from getting across the Arno and getting in line ahead of the Germans for tickets to the Ufizzi. Unlike most bridges in the world, this bridge is not about connecting two points, this bridge is a destination unto itself…or so several hundred thousand tourists are led to believe daily. “Ponte Vecchio” literally means old bridge, named so because in the time it takes to travel through the throngs from one end to the other you may discover that you have become a grandparent. I was skeptical about this thing from the moment I saw it filled with people. I have a general rule of thumb that has served me well, never hang around a place where lots of people mill around listlessly like stadium rock concerts and jail. I mean, this is a bridge and an old bridge at that (old as in 1345, not old as in 1945), and if you think it is a good idea to tread over something that old and creaky along with tons (and I mean, literally, tons) of other folks, that’s your business. High on my business agenda is staying alive to have at least one more capucinno and pasta dolce.

If you want to make sure that you will not be missing anything by staying on the shore, the following fact-finding report is provided here as a public service so that you do not have to go yourself. This is what you will see if you walk across the Ponte Vecchio:

1. Lots of jewelry, most of it real gold, in the store windows that line the bridge.

2. Lots of jewelry most of it not real gold inserted into fleshy mounds of teenage flesh.

3. Guys taking pictures of their girlfriends.

4. Girls taking pictures of guys they wish were their boyfriends.

5. Guys taking pictures of famous Europeans that happen to be printed on the Euros in what used to be your wallet.

6. Jewelry store owners rubbing their hands together and panting slightly.

Review that list. Did I say anything about the spectacular view from the bridge? No? Hmm…could that be because is no spectacular view from this bridge?! A bridge with no view! Wow! Gotta see that, Marge! Actually there is a small opening at the peak between the shops that line the bridge but it is generally filled to the max with pickpockets smoking, trading quips, and counting out their nice, fresh Euros. The view itself is obscured by a statue that itself is obscured by the kajillion bicycle locks…hmm… maybe it’s not a sculpture? I don’t know what they hell it is. All I know is that people are taking pictures of the fence around it ‘cause it is covered with bicycle locks. And just where did those bicycle locks come from, anyway? From all the bicycles that were stolen to procure the locks. It is a folk art monument to petty crime and you can have your picture taken in front of it with somebody else’s boyfriend while somebody else’s girlfriend picks your pocket and the guy in the jewelry store window rubs his hands together.

The Medicis had a private hallway built above the bridge connecting various bits of Medici real estate. Back in the day, the Medici family ran this town and if they had to get from one side of the Arno to the other they sure as hell were not going to walk among the riff-raff and they already had all the gold jewelry anyone could want as well as all the boyfriends and girlfriends. And really, when you are that rich and powerful you do not care about having your picture taken next to a fence covered with bicycle locks (although there is a portrait in the Uffizi painted by Leonardo of Lorenzo de Medici the Moronic smiling like a dope next to the fence with a pair of bolt cutters in his hands). This elevated hallway, the so-called Vasari Corridor, is lined with paintings of self-portraits by such artists as Rembrandt, Rubens and Hogarth. As far as I know, to this day you must be somehow related to a Medici to gain access. There is also a rumor of a secret Medici tunnel running underneath the Ponte Vecchio lined with paintings on velvet of sad clowns. Adolph Hitler, an amateur painter, was known to have revered the sad-clown-on-velvet genre and this is the true reason why the bridge was not bombed by the Nazis.
Posted by Paul Karasik at 2:13 PM 4 comments: 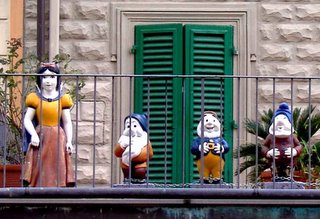 Bring your own tree

I am sorry to report that the Florentines do not understand the true meaning of Christmas. This being the most Christian country in the known world outside of Crawford, Texas, you would think that the celebration surrounding the birth of Christ himself would evoke the proper Christmas Spirit. Nope, they simply do not understand that to have Christmas means to have your house, garage, and lawn ornaments drenched in zillions of twinkling little lights.

On the other hand there is one hallowed aspect of this sacred time that they do properly recognize: the ceremonious emptying of the wallet. The days leading up to the 25th found the streets of Florence awash with happy holiday shoppers gleefully continuing the great Christmas tradition of maxing the credit card. ‘Tis also the season to reflect and evaluate your relationship to your fellow man, particularly your fellow family members. Is your sister worth an Italian hand-tooled yak skin purse or should you just send her a candy bar this year? According to the signs in the shop windows there were sales galore. Upon closer inspection, I discovered that the word “sale” has a different meaning when used by the Florentine shopkeeper. When he posts a sign in his shoe store window that says, “SALE!” it means, surprise, that he has shoes for sale inside.

We went to midnight Mass on Christmas Eve at our local church. They went crazy building churches back in the 1400’s and there are old cavernous churches sprinkled all about Florence. Going to Mass at one of these is a bit like going to church at the bottom of the Grand Canyon except the frescoes are much nicer.

The church-going population in Italy has been steadily declining in recent years (like, since 1725). Blame it on the low population growth, the shredding of moral fabric, or the bossa nova, these are lean years if you are in the soul-saving business. This being Christmas Eve, however every seat in the house was full. Still, that meant that there was plenty of room for us and about 50 other people who came late to stand in the rear and still plenty more room if we had wanted to bring along our pet aircraft carrier.

I’ll admit to being disappointed that they did not crank the organ up, but I guess with a diminished regular congregation they cannot maintain it. Instead the music was provided by a guy with a guitar joined by a small choir of angelic voices and, I believe, a set of bongos. Because of the cavernous acoustics of the church it was next to impossible to hear what was being said even with amplification, not that I would have understood it anyway since it was mostly in Latin and not even Pig Latin, angit day! However, any one of the dozens of little old ladies in the congregation who know the words by heart could have stepped up to the pulpit and taken over in a pinch should the priest have decided he had more interesting places to go like, say, the back of the church and hang out with our fascinating crowd.

Our group of Giovanni-Come-Latelys included a guy with a greasy ponytail and sunglasses (remember, this was MIDNIGHT mass) who did not even feign interest in the proceedings and kept going in and out of the church fiddling with a cellphone and a pack of Marlboros. There was the passionate couple who found the only vacant seat right in the Confessional thus taking care of both the sinning and the repentance in one-stop. There was the lady next to me who may be a Saint by now for working the miracle of simultaneously tapping her toe and snapping her gum whenever the music started while applying yet more mascara.

It was a quiet, subdued walk home. Without the glittering lights it hardly felt like Christmas at all. Usually we come out of Christmas Eve service back home singing those great carols (“Blue Christmas”, “Jingle-Bell Rock”), but we did not recognize any of the tunes sung by the little choir and guitar except one of the songs that sounded to me like, “Puff, the Magic Savior”.

New Year’s Eve is a different story. Many celebrants simply couldn’t contain themselves and the sound of firecrackers began early...three days earlier around two in the morning, as I recall. The assault grew steadily until by midnight of the 31st the whole town shook and the sky was lit with bright colors. It made me really feel good to be alive and not living in downtown Baghdad where this is a daily and far more deadly occurrence. This is not to say that downtown Florence is not without it’s dangers on New Year’s Eve.

We were about to walk home from a party across town but our friend, Camilla, insisted on driving us home. “It’s dangerous out there,” she explained. We laughed and told her that we were not afraid of teenagers with fireworks. “No,” she continued, “It’s REALLY dangerous”. She explained that it is a quaint tradition in Florence to throw things out the window on New Year’s Eve. In a symbolic purging of the old year you are supposed to throw out old objects that you do not need any more. Dawn of January 1st finds the streets of Florence littered with old socks, underwear, and tennis shoes, as well as tables, chairs, and ex-wives. We were told that appliances were a favorite projectile and gladly accepted the ride home.