"I Shall Destroy All The Civilized Baked Goods!"

A cartoonist at the dawn of the comic book creates savage and graphically masterful stories of brutal retribution that are promptly forgotten. For decades the stories are ignored. 70 years later the stories are reprinted in deluxe format, become cult hits, and secure an Eisner Award for the editor. Subsequently, imagery from the stories has popped up as Facebook avatars, tattoos, proposed scale models, t-shirts worn by celebrities in movies, and now… but I get ahead of myself.

A typical Stardust story might involve a simian-like thug plotting to rid the Earth of its gravity but by page two, Stardust comes along to stop the guy and spends the next seven pages torturing him in an inventive, poetically just fashion.  If you’ve been following this blog over the years (?!?), you probably know that I compiled Hanks’ work into two collections, to which I added material about how I found the work and the story behind the work.

Of course I made t-shirts to promote the book. And I’ve seen Hanks’ work appear in different places. Just six months ago, my car battery went dead in the parking lot behind a suburban hotel where I was attending a comics convention. When the young cartoonist who gave me a jump, Josh Bayer, heard my name he rolled down his shirt to show me this: 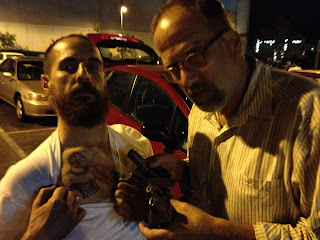 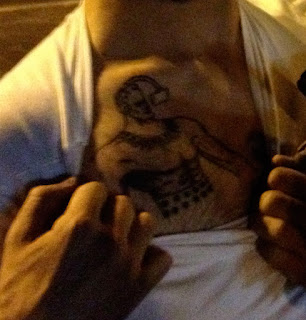 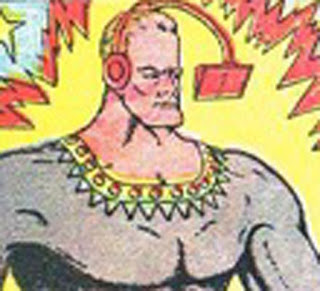 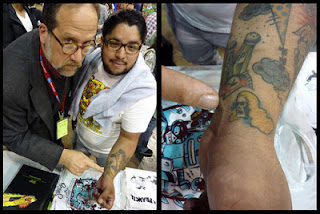 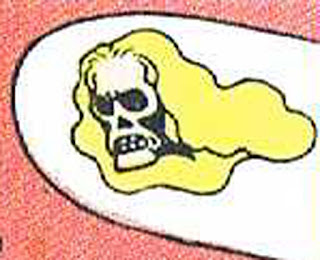 But I think I was even more surprised when I discovered that Hanks’ drawings now appear on cookies.

Sylvia Toth is the baker at www.goldenagebakery.com located in Chapel Hill, North Carolina. No matter where you live, however, you can order cookies from Golden Age Bakery featuring your favorite panels from your favorite golden age (public domain) comics. The Fletcher Hanks cookies have been the most requested items so far. Ms. Toth says that she has made hundreds of them.

If you choose, Ms. Toth will bake you up an entire story in edible form panel by panel (full pages are possible, but too fragile to ship safely). Particular panels that you find distasteful may turn out to be delicious!

The cookies are made from all organic, local ingredients (whenever possible). She has replaced her printer’s ink cartridges with food dye cartridges, so that after designing a cookie on her computer, she simply sends the image to her printer—and voila!—sheets of thin, edible paper-thin icing are covered with accurate reproductions of old comics. Ms. Toth explained to me that the icing is sweet but bland so as not to mask the delicate flavor of the cookie itself.

I can attest to the fact that the cookies look really cool, but… 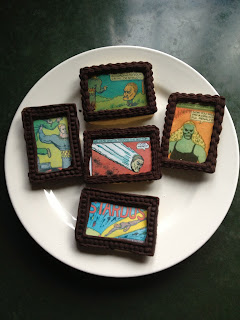 I confessed to Ms. Toth over the phone that I could not bring myself to eat one. Evidently I am not alone. Ms. Toth said, with a baker’s sigh, that she hears this a lot. Why is this? Because people like me, who know enough about vintage comics to want to buy a Hanks cookie, also see these as collectibles—and therefore, not something you’d want to eat.

This, of course, is crazy thinking. Sooner or later an organic cookie is going to get green and fuzzy and illegible. Like any ink jet printing, Ms. Toth explained, in time these panels fade.

With these cookies, each representing a single panel, you can rearrange the story to your liking. Unkink twists in the plot. Let evildoers go unpunished.

Does this make his work better—or does it drain the work of its magical irrational integrity? Using tiles provided by Ms. Toth, I deleted random panels of a typical Fletcher Hanks story, “The Anti-Gravity Ray,” and then randomly rearranged them. The plot suddenly resembled that of “Jane Eyre.”

I ate the panels that did not really move me (or the plot).

I rearranged the remaining panels with other cookie panels from other stories. And ate a few more extraneous frames.

Until, I was finally left with a single cookie…perhaps the greatest cookie ever baked: 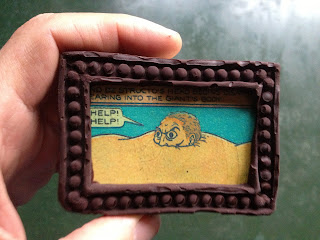