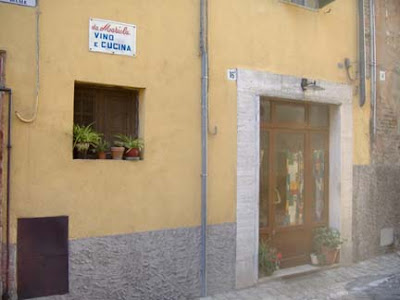 Do you remember the animated cartoon character Astro Boy? He was a quasi-boy like Pinocchio except instead of being a puppet; Astro Boy was a robot with very peculiar feet. Sometimes they turned into rockets and sometimes when he walked they were kind of like suction cups or toilet plungers hitting the ground. They even made a sucking noise as he walked.

I heard this same sound, “Soook. Soook. Soook”, as I walked up the stairs in the restaurant, Mariola. This is due to the fact that Mariola’s is a very old restaurant and they are so busy making delicious things to eat that they cannot be bothered with time-consuming tasks such as washing the sticky stairs.

Also, a tip if you should choose to dine there: do not under any circumstances touch the handrail. You will need a pair of pliers and a beefy guy from the highway department to pry your fingers from the glue-like railing finger by finger.

Mariola is located in a small town called Jesi (pronounced Yay-see) where one of the campuses of the International School of Comics is located. Every week I taught in Jesi as well as two other branches of the school in Rome and Florence. I could never quite get a straight answer from anyone exactly why there was a branch of the school in Jesi, but I think it had something to do with the notion that they wanted to teach the students that professional cartooning is a struggle, so they located it in a town that was a struggle to get to.

The head of the school in Jesi is a buoyant woman named Graziella. Graziella knows details about each student’s life that even the students themselves do not know. Hence she is able to keep them in line much as a mother duck keeps her ducklings in line. They love her and she loves them but occasionally she needs to give them a sharp nudge with her bill.

There is little not to love about Graziella. She was born and raised in Jesi. Her mother was a professional cook who liked her profession so much that on a Sunday, her day off, she would ask little Graziella, “What shall we do today for fun? Something special together, eh? I know…let’s bake a half dozen pies!” As a result of this upbringing one of the many lovable things about Graziella is that she loves food. She says that the reason that she is so fond of the city of Naples is because you can buy fresh bread on Sunday. “Imagine! Fresh bread on Sunday,” she exclaimed to me, “Now that’s a city I could live in!”

This appreciation for food, cooking, and restaurants was very fortunate for me because every week she took me out to dine at one of Jesi’s fine restaurants. We ate well and in very nice, clean, modern restaurants.

But I was curious, “Garziella,” I asked innocently one day, “are there any restaurants in Jesi that are not very nice, clean, modern? Restaurants that are old and, y’know, rustic?”

In answer she looked over her glasses at me and smiled that smile that I had seen her give the students as she got them in line. “You want rustic? I’ll give you rustic.”

This is how we ended up at Mariola’s one fine afternoon along with her son, Elia, and my translator, Rafaella. The hand painted sign outside reads, “Da Mariola, Vino e Cucina”: “Mariola’s, Wine and Food”. Note the order.

The woman who runs the joint is named Maria . Mariola is a nickname of endearment. But nobody in Jesi calls the restaurant “Maria’s” or “Mariola’s”. It has always been known as “Maria Culo Bello”, or “Maria with the nice ass”.

How about that, huh? Not so odd, really. After all in the U.S. we have an entire restaurant chain named “Hooters”.

“Back in the day Maria’s nice ass was well known around town,” Graziella told me, “Maria herself used to proudly explain that it resulted from cooking day after day. All the exercise from mixing and bending over to put food into the oven and taking it out gives one a nice rear end.”

I even met an American on the train a few weeks later who had lived in Jesi for a while. As with most conversations I had in Italy, within minutes the subject invariably turned to food and restaurants and for a moment as we talked I could not remember the name of the restaurant, “Mariola”.

“I went to this really unique place,” I began to tell him, “It was called Maria’s…no…Marianna…no, that’s not it”

One enters the restaurant into a dark room with a bar. The dining room is on the second floor (known in Italy as the Prima Piano, or, logically, the First Floor) so we “soooked” up the stairs and entered, except for Elia who was still prying his left sneaker off the top step. 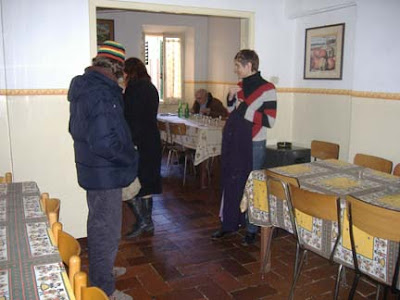 Several years ago my brother-in-law, Steve, took us to a little restaurant in the Tuscan hills referred to by the locals as, “Dracula’s Wife’s”. not because the owner was evil, but because there was no better way to explain his blood-sucking wife. When you entered that restaurant, Dracula’s wife, herself, would hand out the menus and take the orders. She would then proceed to bring to the table whatever happened to be ready in the kitchen or whatever she had too much of. Whether it resembled anything you ordered or not did not matter. What did matter was that you shut up and ate.

At Mariola’s the waitress simply skipped the pretext of handing out menus. She gave us our order. “There’s 3 portions of lasagna left, so that leaves one of you taking the rigatoni. Skewered meats sound good? Good. Water? Yes? Wine? Good?”

She left in a puff and we looked around the room. Three elderly men sat at one of each of the three other tables. They looked as though they had eaten lunch daily at Di Mariola for most of the 150 years that the place had been serving food. If they were curious as to who these strangers were, they did not let on, as they were far too involved in relishing the food before them. 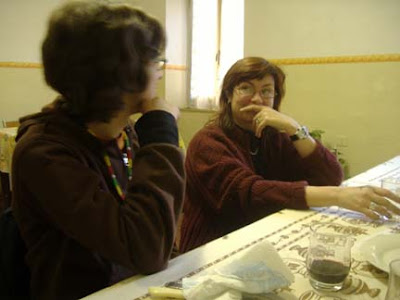 Light streamed in through two open windows gently lifting the lace curtains. Good thing, too. If any serious gust were to burst through, the delicate threads holding these ancient curtains together would disintegrate. The room was painted an off-white and decorated with a pattern: “Splatter-di-marinara”. A charming 8” aluminum air duct ran up the corner and diagonally across the ceiling. There was a small painting on one wall that could have been a landscape, or an expressionistic portrait of a pizza. 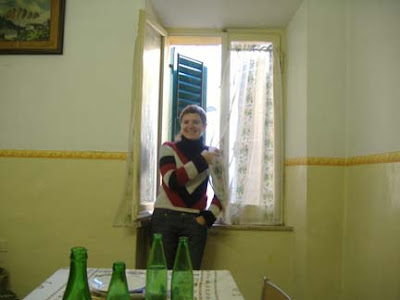 (Rafaella demonstrates the tensile strength of the so-called curtains)

This was not exactly the cozy wooden beamed trattoria that I had in mind when I said the word “rustic”. Did I mention that the dining room was lit with 3 and sometimes 4 flickering florescent tubes?

The lasagna showed up just as I was considering bolting for the stairs. It didn’t look like much. Just lasagna only flatter. Not the gargantuan constructions that I am used to in the States with bits of the kitchen sink sticking out here and there. Graziella shot me another one of those glances over her glasses as I took my first bite. As I chewed, she tilted her head to one side and raised an eyebrow. I swallowed and she smiled. Word exchange during ecstasy is not necessary.

We licked out plates clean and I had a crunchy nibble on the plate, itself, in hopes of divining a few extra morsels that might have seeped into the porcelain molecules, when the skewered meat arrived. In between each tidbit of chicken, sausage, and, well, let’s call it “other meat”, was a bay laurel leaf folded in half and skewered. This gave every bite a particular flavor as the bay interacted differently with each meat. 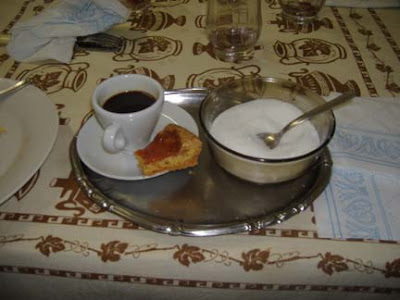 (At Mairola you can have some coffee with your sugar)

Coffee and a simple piece of torte were followed by the appearance of Maria Cullo Bello, herself coming to inspect the strangers. I must admit that I was a bit disappointed. In her housedress and apron it was difficult to tell if she had any culo at all, let alone whether it was bello. She stood at the end of the table and surveyed our work. Seeing the clean plates, she determined that we were worth speaking to and proceeded to give us the history of the restaurant most of which, I am sorry to say, I did not understand. The most important part I got: she had been cooking in that kitchen for 65 years. There are certain things that you learn after cooking professionally for 65 years, like, for instance, how to cook. 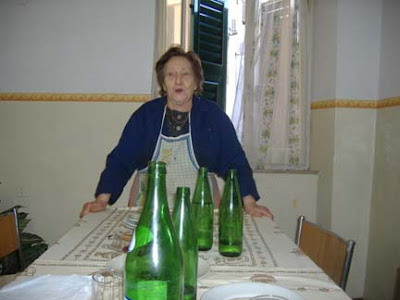 To top things off she pulled out a bottle of homemade after-dinner wine. We toasted her cooking, tossed it back. We toasted the town of Jesi for supporting this fine institution, and tossed back another round. We toasted a few more things as well, and tossed a few more back. At this point we, ourselves, were nicely toasted.

We soooked down the stairs and as I passed the kitchen and saw the dishwasher. She was older than Maria, herself. Could she be Maria’s mother? Possible. Certainly it explained the reason why I could spell my name on the greasy edge of my plate. I will say nothing about the bathroom.

“How does the town allow her to stay open?” I asked Graziella. “In the States, the Board of Health would have closed her down years ago.”

“Who do you think those three guys were who were dining when we came in? She has every official in town eating out of the palm of her hand. And…” Graziella shot me another one of those over-the rim-looks, “they all remember that bello culo.” 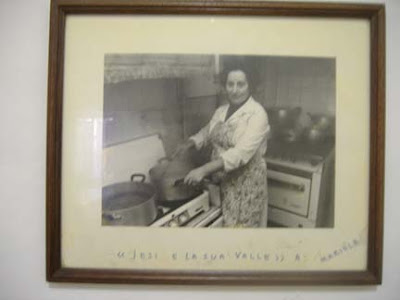