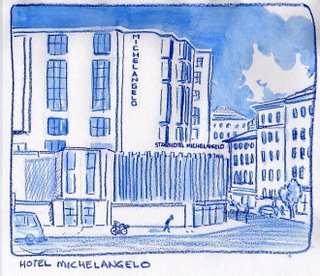 Judge a Book by it's Cover

I have not stepped foot in any of these Florentine hotels. They might all be swell. These are my own highly scientific empirical observations based on walking by them or looking at their names in the Yellow Pages:

The River Hotel: It is not very close to the River.

The Pitti Palace Hotel: Fewer and smaller rooms than the namesake. Also less art on walls.

The Golf Hotel: The closest golf course is Luigi’s mini-golf in Prato.

Hotel Michelangelo: Michelangelo designed some of the greatest bits of architecture in the city. Critics laud his staircase to the Medici Library with its bizarre half staircase that leads magnificently into the rest of the staircase. Needless to say he did not have a hand in the design of the Hotel Michelangelo.

Mona Lisa Hotel: There may be a reproduction of Leonardo’s painting in the lobby.

Hotel Souvenir: It’s a hotel and a t-shirt!

Canada Hotel, Arizona Hotel, and the Boston Hotel: Good choices if you are out late drinking and the only thing you can remember is where you were born.

The Real Hotel: It is.

The Jolly Hotel: It is not.

The Grand Majestic Hotel: It is neither.

Hotel Tina: Only people named Tina are allowed to register.

Dante Hotel: Seven rings of rooms each hotter than the last.

Real Hotel: Hope so. They paid good euros to be listed in the phone book.

Rex Hotel: Only for guys and their moms.

Hotel Airport: Owners couldn’t make up their minds. Is this a hotel or an airport?