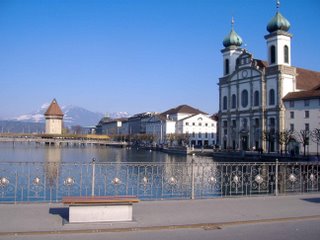 I advise you to go to the Comics Festival held annually in Luzern if you want to see some very interesting contemporary comic art without a lot of commercial hawking, or if you feel like getting away from it all and, just for the hell of it, spend a lot of money. I could go on and on about how expensive things are in Luzern and come to think of it, gosh darn it, I think I will.

Sometimes I get hungry and when this happens I like to eat. I went to a restaurant. Not some fancy place with a curtain over the front window to ward off those pesky customers, but a dumpy place with a lot of young people inside smoking and drinking beer. I found out why they were not also eating when I was served a pile of potato slivers covered with melted cheese and served in a tub of crème di cholesterol. The sum total of ingredients came to about $0.37, the sum total of the bill came to about $27.50, and I came to on the floor with nice people pouring beer in my face.

The local people I came in contact were seemed very “nice”. Everyone smiled a lot. When I went into a store to buy an English newspaper the storeowners smiled a lot. I tried to speak in French/German to ask for directions, they still smiled a lot. As each painful syllable dribbled down my chin and landed with a thud they continued to smile a lot, but I could see the wife impatiently tapping her foot while the husband eyed my wallet with suspicion. The smile muscles on their necks throbbed.

The festival that these folks put on really is exciting. Here’s how it works: sprinkled throughout the small city are a dozen or so exhibits, installations, really, featuring an international array of comic artists. You are given a booklet with a list and a map and set off to fend for yourself. This is probably not a problem for most European festivalgoers, but it seems that when I am dropped into a new foreign town with twisting streets inherited from the Bronze Age I suddenly have the sense of direction of a toothbrush.

Nevertheless, I stumbled across some very fine exhibitions.

There are a bunch of guys from Hong Kong who call themselves,”Springrollll”. They created a fascinating exhibit of drawings, comics, and dolls that had something to do with the history of Hong Kong, or maybe not, but it was very cool.

Jonathon Rosen was one of the few Americans exhibiting and he ate up a few walls with a few massive paintings while visitors in the adjoining room were hypnotized by his mesmerizing and inventive film in which something may have happened.

A group of students from der Ecole d’Arts Applique aus Genf created an installation on the walls in 3D where you were handed a pair of those 3D glasses as you entered. I think that it was a wrap around cityscape, or Martian landscape, but it might have been the inside of a Salvatore Dali’s refrigerator. They were also doing some very sophisticated screen printing on sight under the watchful eye of their printmaker/teacher Christian Humbert-Droz, whom I spoke to in the courtyard outside the exhibit while two of his most accomplished students gave a third student an art installation hair cut that spelled out the name of their favorite band.

Anke Fruchtenburger makes really nice drawings and her exhibit in which large frames from a comics story wrapped around four interior gallery walls was stunning. It was about a girl who had a problem, I think.

Finally, under the train station there was an exhibit that I really did understand. It included works by about eight artists who all work in some kind of comics/illustration reportage. The work was very linear and concrete because it was all based on reporting about real places and events. On artist named (Yves) Noyau particularly stood out for me even though here he was only represented by some open sketchbooks: 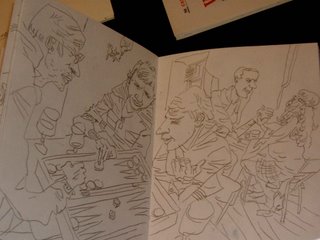 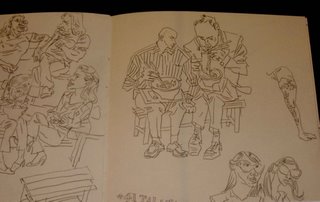 Also in this exhibit was the work of my pal, Ulli Lust, whom I met at the Napoli Comicon. Ulli’s work in this show was a report about the town of Luzern itself. She is considering dropping her last name when she travels out of town because of the eyebrows and expectations that it raises. She has a cool website:

Ulli invited me and fellow American cartoonist, Peter Blegvad, to tag along to a dinner she had been invited to by some Finnish cartooning students. Free meal? At this point the numbers on my credit card had been worn down to nothing so I gladly assented.

Turns out that these students were staying in the house of some chums who were out of town for the weekend. Eventually we thought that we had found the house. But it looked so run-down that it was hard to tell. There was a good reason that it looked abandoned: it was! These kids were squatters and the place is set for demolition sometime soon. Sad and filthy stuffed animals stuck to the windows looked down on us as we tossed gravel at the second floor windows to get someone’s attention. One of the young women came down and welcomed us in explaining that, if for any reason we had to leave, the only way to reenter was to slide one’s tiny European hand through the mail slot and reach around to the functioning doorknob on the inside of the door. Looking down at my size 12 American mitt I entertained the idea of staying outside. Climbing the dark twisting staircase I was overcome by the strong suspicion that several male cats may possibly be in residence. 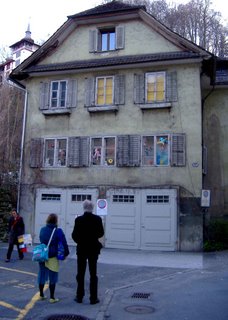 The flat brought back to mind an apartment I had visited a few times in Washington, D.C. back in the early-70’s that had been decorated in the same kaleidoscopic fashion one might call “Louis the 14th Hippie”. One of the hallmarks of such décor is that virtually every vertical surface is decorated with something…anything, and all of the horizontal surfaces are decorated with stuff that people left there sometime in the past.

The students could not have been more delightful, however, nobody was exactly certain what to do about dinner. I shooed them out of the kitchen, since I love to cook, and since, judging by the state of the kitchen I figured that I wanted to know exactly which of the available ingredients were going into my dinner. There was no refrigerator and maybe that was a good thing because when stuff is rotting out in the open it is more likely to get thrown away. I made a nice, simple pasta. It does not take too much to make a nice, simple pasta and here is the secret. Cook the pasta correctly (lots of water, lots of salt in the water, don’t overcook) and make sure that whatever else you put on top of it, you put in something peppery and something sweet. If you have nothing else but olive oil, black pepper, a little honey and salt you will be fine. Especially if, prior to serving, the diners have already plowed their way through several bottles of wine.

A group of about eight of us had a jolly time. If you ever need a good dinner guest to enliven a table I suggest that you call Peter Blegvad. He tells great stories, asks interesting questions and pays attention to the answers.

About an hour after dinner we all decided that we needed more to drink and after going through all of the empties on the table as well as those scattered about on the floor we concluded that to do this we needed to actually get up from the table and navigate through the semi-functioning door. Rather than heading back into the nauseatingly quaint and pricey town center we took a left and after walking a block or two we actually encountered people who did not have the same color skin as ours and bars that did not require a second mortgage to purchase a beer. 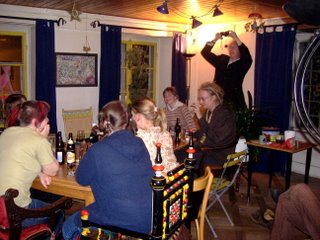 When I came to in my room at the I-Kid-You-Not “Hotel Tourist”, it was the next morning and I spent my last few hours in Luzern receiving resuscitation from the magnificent collection of Paul Klees drawings and paintings at the Rosengart collection. If you ever need a cure for a hangover, three solid rooms of Paul Klee will do the trick.
Posted by Paul Karasik at 3:50 PM 6 comments: