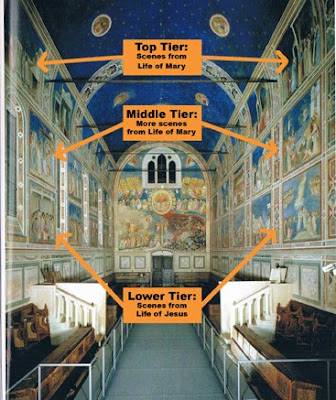 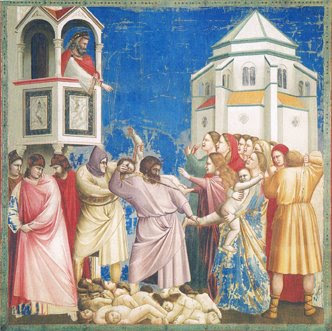 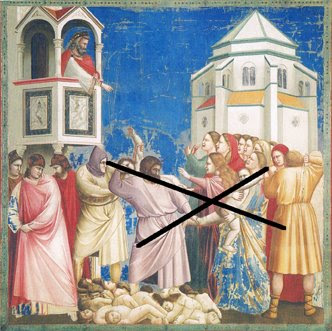 (For more on this point of view I refer you to, “Storytelling in Christian Art from Giotto to Donatello” by Jules Lubbock. It's a wonderful book and I give him full credit here for many of the ideas discussed in this post.)
Posted by Paul Karasik at 12:53 PM

But you neglected to show Giotto's rendition of the "Sensational Saga of the Silver Surfer."

What a great, great piece, Paul! I think I'll print out the URL on little cards, and hand them to every person who asks me "How does a medievalist end up interested in comics?"

Hi, Paul, i'm italian.
I liked a lot this post. It's interesting.
In fact, i think that between contemporary and classic graphic-narrative are many, many similitudes, much over that we think today.
Over the attitude to the panel-composition. Soon, i'd like to explain better that i think about. Maybe i will send you a link, when i will pubblish it in some place on the web.

For now, again, compliments!
...and Sorry for my bad english :) bye!

Thanks for all the response.
Chris: No, but you gotta admit that Giotto's weeping mom does hold a passing resemblance to Big Barda.
Anne: Absolutely. In fact modern cartoonist face many of the same challenges as the cave-painters except that the coffee's better.
Karen: If they mistakenly give you a handout, I want a cut.
Biri: Grazie, amico!
Claudio: If you do write about this subject, please pass along a link. Ciao!

Not only do the compositions follow the same principles as a comic in a lively way, but the feeling of discovery and invention, esp as the series of frescos continue and the "adventures" of St. Francis include his intervention in human affairs feels like a cartoonist finding his legs, similar to the confidence of Ditko later in his run on Spider-Man.


Here's my own, similar reaction:
http://tinyurl.com/mphkv7

Curious, Stephen. What exactly about this work makes you think of Ditko?

Ciao, Paul!
I'm glad you and your family liked your Italian trip, and I hope you'll be back soon :)
I miss your lessons so much, but maybe in future we could all have a trip along Venitian lagoon analyzing some mysterious churchs or places... sounds nice!
There's a lot of thing to discover..
Bacioni, evviva il gelato! ^^

Next time we will give your Mama plenty of time to prepare for a "surprise" visit! I understand that she is a great cook!

Hey, Paul! Thanks for dropping a note at my blog, I hope you see this note as I do not have an email.

Wow, Amberly, you can say that again...but please don't,